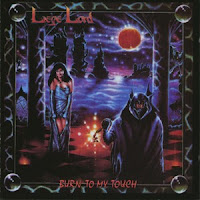 When you're using the same enigmatic, fantastical cover art style that adorns the covers of The Specter Within and Awaken the Guardian, you must immediately expect a higher expectations for the quality of your music. Freedom's Rise was an average, effort at best, so Liege Lord expanded on that forgotten work with an elevated sense for songcraft that placed them squarely between Helstar and earlier Fates Warning...with Andy Michaud's piercing, wavering vocals that sadly would still break into his horrid falsetto screech...which King Diamond had already been doing for years, and far better. Yet, aside from these few moments of head shaking and begging the question 'Why?', Burn to My Touch is honestly a somewhat strong record of its 3rd Class (that being the class below the bands who would go on and forge careers, i.e. Fates Warning, which in turn was below the bands like Slayer, Metallica and Megadeth who would DEFINE careers).

The style is not a huge departure from Freedom's Rise, but there is a darker element here, perhaps brought on by the lessened reverb on the actual guitars. The bass of Matt Vinci is just as busy as ever, and Pete McCarthy was replaced here by Paul Nelson. Michaud's bite and bark are largely the same as before, though this album would be his swan song with the band, and his performance is simultaneously superior and more annoying than the debut. At just over 30 minutes, a fairly brief example of the American speed that ramped up its Maiden, Dio-era Sabbath and Priest influences into a more extreme form that helped usher in the style that we now dub power metal.

"Transgressor" is hot and heavy, like a Motley Crue that skipped a night of heroin to inject some classical influence into their sexy swagger. Michaud walks a fine line here between quality frontman and major headache, but the music compensates...with some thick bass lines strolling below the great leads. "Bird of Prey" is catchy up front with its great, sinking ship rhythms, and the work well until the screams, though they could have stood to be a little softer in the mix. "Cast Out" rocks hard, with searing opening leads that recall like Alex Masi's shred of the day. The entire track has a higher, melodic leaning that matches the vocals, and some of Michaud's shrieks even fit right into the following track "Portrait of Despair", one of the catchier tunes on the album. "Black Lit Knights" was perfect for getting laid in that dark, airbrushed van your cousin gave you after giving up on it in 1979...assuming you had a metal enough lass who wouldn't scream at you to turn it off.

"The Manic's Mask" boasts a metric ton of Vinci's excellent strutting fingerwork, and Michaud really finds his stride, with a range in between his previous two poles that simply doesn't annoy within the context of the writing. The leads here are likewise terrific. "Legend" is somewhat of a mess, there are good rhythms in there but the vocals don't seem to mesh so well. "Walking Fire" is an instrumental which balances some jet fueled blues rock into its metal carapace, and "Speed of Sound" is a power metal ballad, though not untirely untasteful aside from a few annoying shrieks.

From the cover to the content, Burn To My Touch was a steady improvement over its predecessor, though Liege Lord may have already been too late to capitalize on anything more than cult status (it's not nearly as good as Somewhere in Time, Love You to Pieces, or Awaken the Guardian after all). The solos and bass are really well done on this album, and Michaud has just enough character to promote tolerance for his eccentricities behind the microphone. Like the previous record, it still holds up pretty well if you can live through the 80s production snafu (loud, loud vocals in the mix). It was enough at least to send the band once more into the field...