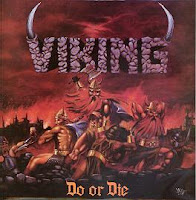 Viking was a Californian band formerly known as Tracer, who generated some buzz from Metal Blade records that resulted in their signing and the release of the debut Do or Die. This is a pretty fast and intense record, with an unrelenting streak that survives through the majority of its tracks. For comparisons, think of other extreme Californian acts like Dark Angel, Slayer, Sadus (sans the loud bass), Vio-Lence and perhaps later Hexx (when they switched to thrash metal), and you'll get a pretty fair idea of what Viking were pushing. Although this is a fair effort with a lot of unbridled, raw energy, only a few of the tracks manage to provoke some memorable riffing; the remainder are simply torn through, but at the very least I promise you will be headbanging for almost the entire 32 minutes.

Ron Daniel has a pissed off vocal profile not unlike a mix of Don Doty and Tom Araya, and he spits all over these 9 tracks with a very natural balance of aggression...they don't really clip any of the expression from his barking, so while it may often feel monotone (ala Dark Angel), it can occasionally become wild and charismatic. The guitars just don't stop...they are cruising and thrashing and such maximum velocity that it's hard to imagine these guys (Daniel and Brett Sarachek) getting some lock up in their hands. But then, this is going to be the appeal of Do or Die, it's savage thrusting. Matt Jordan (drums) and James Lareau (bass) are certainly up to the task of keeping pace, the drums are like a storm of slapping sticks and skins which maintain the tempos with precision.

This album blows on by at 90 mph; first with the aggressive "Warlord", and then "Hellbound", with a speed equal to what you'd heard on Eternal Nightmare by Vio-Lence, though the riffs are somewhat less distinct, and Daniel's vocals do not stick out quite like Sean Killian. It's hard to imagine a fan of Darkness Descends not becoming excited here, because very few of the Bay Area/California thrashers were performing so relentlessly and recklessly. "Militia of Death" also bursts on by, as does "Prelude/Scavenger". "Valhalla" actually slows things down to a normal street thrash level, first banging rhythms in full effect, and "Burning from Within" begins with a creepier, slow-paced churning reminiscent of old Pestilence, though it picks up into one of the more intense tracks on the recording. "Berserker" is awesome indeed, a blast of excitement that delivers in both its riffing and speed. "Killer Unleashed" opens with some rolling bass rhythm and descending dual leads, creating a horror-like atmosphere before the forceful thrashing begins. "Do or Die" is another of the better tracks, with more of the band's exciting, unforgiving riffs below some of Daniel's more sporadic vocals and motivational lyrics.

Make it or break it - that's our battle call
That's the way you've got to live your time
If you won't do it now, don't do it at all
Wasting days is a moral crime

Do or Die seems such a fitting title for this album, because the band walks into the studio and blows their way through the playlength with abandon. The following album, Man of Straw, is quite reserved by comparison, but makes up for it in other ways. The mix here is somewhat muddled, with guitars that churn like butter, but not much of a setback since you will be focusing in on the endless stream of riffing. And to that extent, there are just enough quality guitar lines here to break the bank. Even when forgettable, the sheer force of the delivery is enough to ensure that any fan of extreme California thrash and speed of the 80s will appreciate this.

Highlights: Burning from Within, Berserker, Do or Die