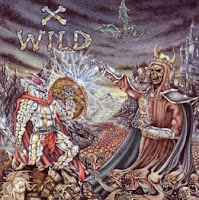 After two albums in a single year, X-Wild took the next off, to return in 1996 for their third and final album. Consequently, Savageland would be their magnum opus, and the very best power metal album of that year (to be fair, there wasn't a lot of competition). This is tight, conceptual, bold, and frankly quite savage sounding (puns intended) by comparison to either of its predecessors, and even though the songs are not 100% awesome, it has a few exceptional tracks which are among the best of the 90s German power. Frank Ullrich (Attack, Grave Digger, Living Death) replaces Stefan Schwarzmann for the swan song, but keeps the drumming at much the same pace, wonderfully complementary to the raging fantasy warfare that creates the heart and heat of the record.

Yes, Savageland was over an hour of the best in dorky, but manly power metal you were going to hear, and though the influence still hovers like a pirate caravel to a helpless mercantile galleon, this is the effort where X-Wild have actually come into their own, no longer just a simple ripoff of Running Wild. A grim, pulsing intro (complete with Knight's goofy narrations) initiates the listener to this war-strewn world of butchery, and "Braveheart" enters with Iron Maiden-like savvy, before the level chugging of its Germanic verse and the uplifting, memorable pre-chorus. "Savageland" is next, forged in pure power as the double bass rolls below the very patriotic rhythm and fire. Not the best track here, but "Born for War" compensates with an elegaic grace, as slow and steady wins the race. Knight sounds like a blade finally sharpened to its most deadly edge here, and the way the lyrics interact with the melody makes for a pretty mature spark. "Murder In Thy Name" trots forward with more of Knight's frenzy and passion, and "Children of the Underground" has a killer synthesizer intro which meshes very well into the deeper, folksy vocals and brooding atmosphere (no REAL CHILDREN were hurt during the recording of the chorus!)

White as snow
Eyes that fear the light
Pale and drawn

Oh noes! Will our heroes free the child-slaves from their dusky, toiled fate? We must wait for an answer, for next X-Wild journeys into the "Dragonslair", with its arching melodic intro and somber acoustics, a sort of 'power ballad' with an emphasis on the former word. But no discussion of 'power' can be complete without the next song, one of the best songs of its class to ever be penned into existence. Yes, we might have to suffer through Knight's (AWESOME) narrative here, but it is (AWESOME) well worth it to hear the thrashing of those huge mutes, while the drums build a violent crescendo and the vocals drive forward the ULTIMATE in warfare motivation. If you do not like this song, you do not like power metal. The two are one and the same, synonymous, so check your estrogen back at the fucking door! This is "Die Like a Man", and you will. So make a prayer to whatever deity you hold high.

And if that track is Savageland at its most...savage, "Field of Blackbirds" is X-Wild at the most glorious moment of their career, a beautifully trudging anthem of loss that actually achieves what you might have previously thought impossible for these expatriates...true beauty. The sadness persists through the slowly slogging guitars to the pre-chorus and the wonderful payoff. Holy Glory, Batman! Another of those songs I could gladly die to, though like a man I had already been killed off on the previous. So...yeah, play this one at my burial instead. It's pretty fucking hard to follow up that 1-2 punch, but Savageland is not yet complete, and Frank and the boys will give it their damnedest as the "Clash of the Titans" begins to rock out like, like if Perseus was somehow given a motorcycle by the Gods, instead of a pegasus. "Hunting the Damned" opens in a thick, oozing bass plod, emboldened by huge chords which recall the Running Wild influence, a pretty strong power anthem despite its crawling gait, Knight going wild. "Chaos Ends" is too fitting a title for the finale, and it is definitely a solid track with more of Knight's better vocals.

Savageland is a beast, though 2-3 of the tracks simply do not exude the power of the rest. The sound is immaculate, spacious atmosphere that will engrave this album into immortality. If you've never heard X-Wild and want the 'full spread', then I highly advise you start here. This effort showed a band on top of their game, and on par with many of the best from Germany. It's the most mature, with all the best considered rhythms and a few tracks that were worthy of radio airplay, even though we were living in a world of self-hating alternative rock and incestuous boy bands. This is the one you want.

Highlights: Die Like a Man and Field of Blackbirds are not just highlights of Savageland, but my entire life to date. If only the rest were quite so good...