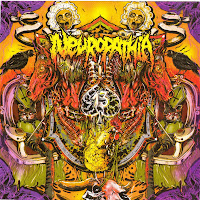 In celebration of the band's 13 years of existence, and hot on the heels of their s/t album earlier this year, Poland's Neuropathia have issued this new single/EP with 5 tracks. Like that album, the tracks are slathered in a great mix with good, pummeling bass, fuzzy neo-Swede distortion and the band's bark and grunting over some unassuming, fun punk/core rhythms. Think post-Wolverine Blues Entombed with a little more of the underground grind ethic and you wouldn't be far off the mark.

Four of these are new tracks: "Silent Weapon" has some big grooves to its death'n'roll visage, and "Digni Poser" has a nice shuffle to its verse rhythm, and a caustic d-beat bridge. "Family Cancer" has more of the big Entombed-like chords wrapped in a punk melody, and "Before Became After" is a little faster, like splatter speed punk stoked on glory and acid, with a nice acoustic sequence alongside the driving drums. Fuck off you fuckin' fuck! The 5th and final track is a re-recording of the title track of their debut full-length album Graveyard Cowboys, which is yet again fun punk rock & roll with the more aggressive, brutal vocals.

There's certainly not a lot to the 13 EP, but then, Neuropathia are not a band who revel in depth. If you are a fan, there are some new songs here, they do not offend, and they sound as good as the last album. If you're not feeling the Polish grind, or Swedish style d-beat rhythms, then there simply isn't anything here to snare you.