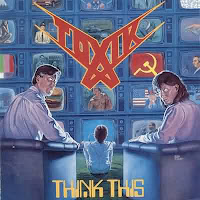 So, as it turns out, World Circus was naught but a primer for Toxik, and a crude one at that. So if that slab of frenetic riffing and acrobatic screeching is only the tip of the iceberg...then just how good could the follow-up be? Two years pass, and Toxik returns to answer that question, with a close to immaculate sophomore release that defies all expectations and stands far out ahead of the pack, almost reaching the lofty heights set by other bands Coroner and Deathrow in 1989 with albums like No More Color and Deception Ignored. Think This goes above and beyond its predecessor in that the memorable writing of the songs is ramped well up, the musicianship is on point if not exceeding that, and the entire album features a concise structural theme which explores the horrors of mass media and its effect on the average American. Not all the lyrics share the same subjects, mind you, but as a whole they function like a mirror into the issues of the late 80s, when our programming was becoming all too evident...

There are a few personnel changes here which may also have contributed to the album's superiority. Vocalist Mike Sanders is replaced here with Charles Sabin, who is another vocalist capable of the high pitched notes, but reigns them in considerably for a performance that falls somewhere between Ray Alder of Fates Warning and Erik A.K. of Flotsam & Jetsam (the latter more in attitude). John Donnelly joins Josh Christian on the guitar and additional synths, and the band begins to have a field day as they create a progressive speed/thrash classic which resounds even today. 20 years and not much of the paint has flaked from Think This. You don't hear many albums like this today, with great higher pitched singing that doesn't grate on your nerves or attempt to annoy you with retro poseur moronism.

"Think This" wastes no time in cutting the point, the youth are being contorted over decades of viewership into a set of beliefs, mind control through repetition alone. This task is accomplished with a rousing, twisting thrasher that could just as well have been written by Dream Theater, for all its wonderful solos and melodies and jamming potential (but never overboard). "Greed" shifts the channel to a wonderful Wall Street sample and a turbulent, escalating thrust of melodic thrash metal which develops momentum and mystique through its myriad riffs, acoustic overlays and constant activity. "Spontaneous" is one of the best Toxik tracks hands down, with a Bush (senior) sample that leads into a great mid-paced mosh rhythm, steadily building steam with a flurry of bouncing bass and churning riffs that develop a punctual verse. The chorus is stunning, as Sabin screams out the woes of economy like a jet hissing past inches from your face. "There Stood the Fence" is a hard rocking power ballad, but a beautiful one. If this track had the name Poison, Warrant or Slaughter attached to it, we'd still be hearing it on our classic rock stations today. But alas, it does have a bit of a technical swagger to its writing which still identifies it as Toxik. But have no fear, "Black and White" returns to the band's manic, skilled riffing and clinical dissections of the modern world, with an amazingly catchy melodic vocal bridge and freakish, discordant edge to the chorus, and excellent leads.

Politicians, word magicians they've got us fighting ourselves
Simple logic with hands in our pockets
We're all for sale!

Ditto "Technical Arrogance", with its coiling rhythms and arpeggios. Ditto "Burn Jim/In God" which opens with haunting organs and evangelical samples before rupturing into a thrashgasm. "Machine Dream" is beautiful, with lush melodies and synth tones that once more give in to the impulse to thrash out of control, and searing dual leads. After this, we are treated to a great cover of Zeppelin's "Out on the Tiles", which somehow fits into this album perfectly. "Shotgun Logic" is the anti-drug anthem, opening with an all too familiar commercial sample and proceeding to punch out some pretty seriously amazing riffs. "Time After Time" is the last track, with some more amazing guitar work, and a really cool interplay with backing vocals below Sabin's screaming. To say that this is actually the weakest track on Think This is really speaking volumes for just how tight this album was in its day.

In a world that was embracing Fates Warning and Dream Theater, I find it absolutely staggering that this record was not a major success...it's superior to either Perfect Symmetry or When Day & Dreams Unite, if only people had been listening for it. The album is still quite a refresher, with a level production that recalls King Diamond's Conspiracy of the same year. Sadly, it was the last we'd hear from Toxik for years. The lyrics are still pretty relevant, and though some of them have that kind of cheeky 80s socio political highbrow vibe to them, they're not bad. The band is back together these days, supposedly working on new material, and let us hope it's not too late for them to achieve the glory they deserve. Some people may rue Sabin's higher pitched, shrieking vocals, but if you're on board for some great screaming and wonderful, progressive speed and thrash, this automatically belongs to your collection.

Highlights: randomly skip to any point in the 53+ minutes of this recording, and you will likely land on a highlight.