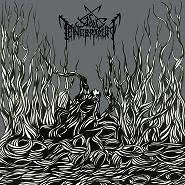 I'm not sure if the members of Sidus Tenebrarum considers their music a black/thrash hybrid, but this is certainly the sound that manifests itself on the Italians' first full-length album Born from the Dark Rib. The obvious starter points are the sounds of Kreator, Sodom and early Bathory, dripping with the ghoulish delights of Satyricon and Mayhem. It's a lot harder to pull off than it sounds, to maintain the energy of the one and create the sickening atmosphere of the others, but here we have some Italian madmen who do it almost with ease, at least on the better tracks.

To begin, "Exerpts of Fury" is a monstrous track to open this album, and quite likely the best. The riffs are fast and vile, capable of crushing a beer can when they slow down to a manic, spike fisted pace. In the old days, if you were at a show and heard this rhythm and did NOT approach the stage and pound your fist in the air, we would have to take you out later for some 'therapy'. Well, those days are back again. This song fucking kicks ass. Giulio's vocals sound like a grisly celebration, like Vlad Drakul if he cheerfully ate the corpse sof Turks after impaling them, while trying to hold a few conversations with his guests. "They Won't Leave" crashes forward with a blackened, ringing rhythm, and then escalates into another wildly thrashing force, with an excellent careening guitar line that penetrates through the end of the verse meter. "Unutterable Worthiness" is another abrasive, violent feast of fist wrenching black thrash metal, glorious in its unswerving hatred. "When Mind Collapses" is likewise very good, though its cruel, enchanting rhythm guitars might become a little repetitive.

The second half of the album does not hold up quite so well. "Vril" sounds like your standard melodic death metal charge rhythm from the late 90s, and the chugging verse below the vocals is not quite enough to save it (though the vocals themselves are decent). "Nothing Foreign" has a higher pitched, thrashy guitar that thrives alongside the rather loud vocals, and in truth this is a decent enough song though it lacks for some of the glistening black blood of earlier tracks. "Lord of the Night" starts with a thick, gooey bass line and then evolves into some pretty violent thrash metal, with a great riff at 1:10, but the closing track "Void" is chunky and somewhat forgettable.

I'd say 6 out of the 8 tracks on this album are exemplary, and the band is actually quite strong in a genre that has been lacking of late. I hope they'll push the thrash elements even further, because the only 'black' element of the music that I enjoyed was the spiteful, venomous vocal stylings. Anyway this is a fairly solid ass kicking if you like similar fare, maybe a Bewitched or Maze of Torment, and certainly the first few Kreator albums.

Highlights: Exerpts of Fury, They Won't Leave, Unutterable Worthiness, Lord of the Night