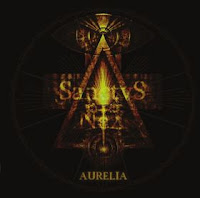 England has been producing some outstanding underground black metal in the past few years. Some bands are leaning towards the Saxon pagan/folk atmosphere, where others are creating something quite more haunting. Sanctus Nex fall into the latter category, as their debut Aurelia is extremely bleak and tugs away at the heart strings one by one until you experience the rapture of a death coma. It is quite difficult to gaze upon the sun after hearing Aurelia... because in a world where a soul can produce such a work, one does not want to believe that such a polar extremity could exist in the same space.

By the time even the intro instrumental "Exordium" has ended, I had already contemplated suicide a number of times, making a checklist of the pros and cons of a continued existence in the 21st century. This track is only half the length of the other three compositions, which do include vocals. "In Pursuit of Albion" is a rager which moves like a cold frost covering the stone desolation of the farthest reaches. There is ice in the hearts of men, and vocalist Torn is here to warn you of this ice with his deep, tortured rasp that simultaneously fills the void of the riffing while opening a void in your soul. The riffs of the band are not spectacular, they keep things minimal, jangling with primal black ichor to compel forward the drums and agony. "Held in Reverence" is at its best during the mid paced rhythms which provoke ultimate evil below Torn's voice, but the blasts can be a welcome breath of chaos that scorch you like nuclear winds cast forth from the swollen maw of abyss. "Genesis Reversion" is savage and largely unrelenting, with a few cascades of frost and fire-tongued guitar that slow up the extremity to ravage you with their depressive intentions.

Oh how the pale beauty spoils!
Show me a nothingness
Where-in lies the essence of our existence.
This collective holds the power to grieve
More than birth itself.

Someday, we may all find ourselves hanging from trees or city gates, in a mass exodus from the emptiness of life. Why not choose death? The music of Sanctus Nex is certainly open to the possibility, because it is as dead as your ancestors, and far more haunting. The band is extreme enough to sate those into slavishly violent black metal, and yet subtle enough that it dwells in the margins where the ghosts tread. The writing is far from revelatory, but the grim atmosphere more than compensates, transforming Aurelia from what might otherwise be a mediocre foot note into an inglorious, compelling end.

They should sell insurance for this type of pain.

I'm still taking in "In Pursuit of Albion," but this really works for me. The vocals are sick, the slow parts are pretty doomy and hypnotic, and it's pretty refreshing when they pick the speed up. Definitely a feel-good album, this one.

Fuck, gonna have to touch up my year list now.