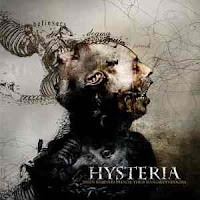 Hysteria is a brutal French death metal outfit who takes the influence of a band like Vader, Behemoth and Morbid Angel and then runs with it. When Believers Preach Their Hangman's Dogma is their 2nd full-length offering, which follows the 2006 debut Haunted by Words of Gods. Perhaps the closest comparison here is the sound of their fellow French death act Yyrkoon, with a similar, blunt edge to the composition style, an infernal thrashing that is converted through Sylvain Ostengo's grunting into the realm of heavenly death. Not all of the tracks on this album were very impressive, most just meandered through a moshing holocaust with some leads here or there and a great tone, but at a few points, the band just explodes into a great rhyhtm, all the instruments come together, and it escalates to something more...

I didn't get a lot out of the first few tracks, but "Suffering Make Me Almighty" has a decent death bridge at about 1:20, and as "Your Kingdom Will Be Mine" develops, is breaks out a cool lead with some nice old school grinding death below it. "Still Haunted by Flesh (Work or Torments Pt. III) uses more melody for its thundering verse, and a haunting desperation permeates the brutality. "Art of Evil" is chastened by a wall of bludgeoning, evil octaves that recall Hate Eternal or Morbid Angel, and "The Unholy Creation" launches like a downtrodden, double-bass weapon of war, once again using melodies that are subtle to lift its crunchy tones into something more than the average death. Other tracks worth a mention are the choppy "Stroke Down By Disease" and the glorious, brute "Blinded by Religious Doctrines".

The production of When Believes Preach Their Hangman's Dogma is nothing to scoff at, with simmering guitar tones that perfectly compliment the puncutual, bludgeoning bass drums. As far as their technicality, the band is certainly at the level to compete with its peers from Poland, France and the US, though Hysteria is never concerned here with over the top flashiness or excess leads, complex structures. If you've enjoyed the recent onslaught of Vader or Behemoth, I can think of no reason why you wouldn't get something from this effort. It's not great; the tracks are not often all that memorable, but at least it's tight and menacing.

Highlights: Art of Evil, The Unholy Creation, Stroke Down by Disease