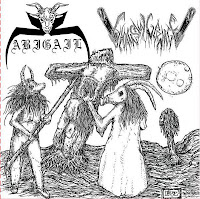 The best split releases are those which offer you new material from both (or more) of the bands involved, and Satan Plays Speed Metal delivers this much at least. The only problem here is that you get two excellent Abigail tracks, which sound like the Ramones jamming with Sabbat, and then two tracks from a San Diego band called Chainsaw Carnage who play death metal which sounds as if it were recorded in a garage...

No, not truly speed metal, but raw old fucking death metal with a heavy influence from Slayer. The style does not offend me, but the riffs aren't worthy enough to forgive the band's nostalgic, messy barebones structure. "Chapel of Dead Angels" and "Consumed by Black Flames" are not tracks I will be return to, though I definitely wouldn't mind checking out the band if they took their retro splatter into a proper recording, it could very well kick ass. But I remember making garage tapes of my old improvisational death metal band in 1990 that sounded better than this.

So we are left here with only one option, to doubly enjoy the hilarious and awesome offerings of Japan's Abigail. "Satanik Demon Master" sounds like the fucking Ramones until Yasuyuki Suzuki starts laying down the constipated metal law, his vicious and unforgettable vocals. The track operates on a standard 4 chord progression that only changes up for the chorus and a steaming old schol metal riff at the one minut emark. "Satan Plays Speed Metal" is a mite faster and more deadly, but still carries forth that foul punk aesthetic, ala the Misfits or Ramones, and dowsed in the hilarious lyrical vitriol.

To my knowledge, the Abigail tracks are not available elsewhere, so this is worth having just for those (or wait for a possible compilation). Though the tracks aren't all that similar to the band's recent and brilliant Sweet Baby Metal Slut, I am hoping the scum will continue along this route for their next full-length. An entire album of this style would have girls dripping all across the past three decades, and myself as well.