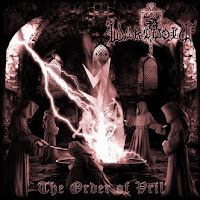 Black metal is often strongest where it can illicit simplistic, glorious thrills from a rather average palette of composition dowsed in a swelling, orchestral backdrop, and it is within these lofty rafters that the Polish Werewolf glares at you, from a dark ceremonial night in which great wickedness will occur. Nothing more is necessary than to frighten the limits of your mind with gothic horrors that continue to impinge themselves on the frontiers of our public thought, and The Order of Vril does just this. Such a wondrous gloom is cast by this album that you simply want all of the events documented herein to be real...not simply the folklore of old. In short, what I state to you is that Werewolf is truly fucking awesome (far better than the members' other band, Iuvenes), and having to review this back to back with another great Hellveto record evokes a joy within me that is at the very least heresy, and will probably earn me another ticket to a mythological afterlife of punishment, for I have many.

Dark, driving guitars and choir-like synthesizers grind and romance the black incantations of your psyche through the grim horrors of "Wolfs Lair", a fortified prelude to the surging darkness of "Night Hunter", beckoning towards you from the tops of moonlit mountain ridges as you race your horse drawn carriage into some semblance of safety. No such inn lies by the roadside on your journey, unfortunately, and you are forced to press on through "Dark Pagan Mountains" to either meet your end or shelter. If you'll notice, there is very little to differentiate any track on this album. It's almost a single song, given slight variations and lyrics but using the same old dirty bag of bones on you every time. For some reason, The Order of Vril gets a pass, because for 45 minutes, I did not want to be expelled from its vacuous phantoms and insidious graces. I was as enamored with "The Return of Wolf's Brothers" as I was with "Alpenfestung" and the treacherous, forbidden glories of "Vrilmacht".

The Order of Vril is an anomaly, because on the surface, there is very little reason to enjoy it so. The songs all pull at the same strings, use the same tones and atmospheres, and I imagine most listeners would become very bored, very quickly. It's an entirely level playing field...there are few segues or moments of climax and relief. Simply an endless (well, 45 minute) well of sorrow and dark forests and hills and ancient cathedrals and excommunication and rituals of death and dying and metamorphosis and blood thirsty beasts that want to lap at your dripping life, suck you dry and then murder the hopes of all that surround you.

It's a beautiful thing!