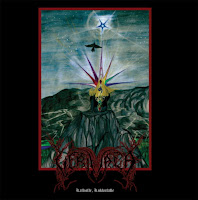 Mikko Kotamäki, otherwise known as the Goat Tormentor, must rarely have time to eat or sleep these days, as he is keeping himself busy as the frontman for a great many diverse projects (Alghazanth, Swallow the Sun, Empyrean Bane, and the new super-group Barren Earth). In such company, Verivala must seem on the low end of ambition, a raw as fuck black metal band who take a lot from the pages of countrymen Horna and roll through 8 tracks in 40 minutes. Kalliolle, Kukkulalle is actually the band's second album, having released Voittomme 5 years back. Though this is a reasonably executed record which may appeal to fans of lo fi, churning black metal, I did not get a lot from it.

The riffs groove and grind in a pure tribute to the masters (Hellhammer, Impaled Nazarene, Darkthrone and Bathory all number among the influences here). But there is that feeling of many guitar lines having already been done, only re-organized here for to create concise tracks that simmer and broil in the cauldron of Hellish fire invoked by the dark vocals and extremely brooding atmosphere of the record. The primal nature of the recording is what really reminds one of several Horna recordings, as the band lays out the flat, simple chords under the harshness of the Goat Tormentor. I like his voice here, it echoes across the black landscapes like a preacher of evil, especially on the better tracks like "Kristus ja Risti" and the morbid "Saatanan Miekka". Closer "Mahapralaja" is another good track, despite being the longest on the release; pure gnarled filth with a few transient, somber moments.

In summation, Kalliolle, Kukkulalle is far from a bad effort. It's pretty much pure Finnish black metal, between Horna and Barathrum, and if you seek nothing more than you can lose yourself in its twisted corridors of hatred and ritual. I only feel that by this point, I have heard this album already countless times, and the band's riffs do not overcome the spirit of truth and derivation. I cannot say much else either in favor or against it.