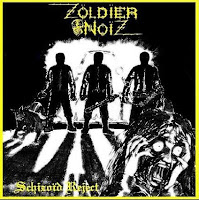 What would have happened had Voivod never transformed into the world's premiere sci-fi apocalyptic metal band, but took their grimy old sound (circa War and Pain and Rrroooaaarrr) down a more crazy cult thrash metal avenue, singing' about war and drugs and such? Well, Zoldier Noiz would have happened, because this French band transforms that foetal, uncouth aggression and punk projection from a question into an answer. After about a year of dicking around and a pair of demos a few years back, they have arrived at Schizoid Reject, a 37 minute collection of 8 uncaring, disgusting anthems from the decaying brick and mortar backroads of urban waste. Now, let me state that while Voivod was certainly a huge influence, you can hear a lot more here from various other splatter metal acts like The Accused, Amebix, early Corrosion of Conformity (before they got all stoner rock on the radio), and Cryptic Slaughter. But the spaced out, trippy guitars will always bring you back to the primordial yesteryears of our Canadian heroes.

The album begins with the title track, which explodes in decadent and evil leadwork, shuffling proto-punk/metal drums and the smothering vocals of Tankvinss. "Noiz and Smoke" has a great little thrashing rhythm which is layered with out of control speed picking that only adds to the morbid, oozing menace of this dystopian dream cult. "Straight Down to Hell" sounds like what might happen if Tom G. Warrior, Piggy and Lemmy jammed out together in 1984 and pressed the [RECORD] button on the nearest cassette deck. "Remnants of Blitz" has some brutal thrashing breaks and more of the spastic, alien leads. "Outcast Thrasher" has a mix of ballsy blues elements and grimy dystopian undercurrent, once more reminding me of Voivod, while the cover of Death Strike's "The Truth" is about as good as could be expected. "Flesh for Whip" and "Time for Prayers" are both good enough if you enjoyed everything to that point.

This debut is a truly cool, and successful attempt to revisit a very obscure phase in the thrash metal scene, that of the formative early to mid 80s when bands were still experimenting with the punk in their sound. Individually, the songs don't feature a lot of great riffs, but their drudging intensity and wacky leads win out in the end. The album was recorded analog to capture the original tones of its influences, and it's not the type of work which will cling itself to the attention spans of those seeking out something extremely spastic or brutal. But if you are among the few and the brave that think fondly back upon those years of broken glass, skateboarding injuries, and raunchy thrash and punk straight from the gutters of the imagination, Schizoid Reject will feel like a siren song.