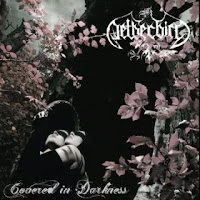 Netherbird is a Swedish band who play an accessible brand of melodic black metal, they have already released a few EPs, and a debut album last year. Covered in Darkness is a brief and harmless collection of cover tunes, recorded a few years ago, that the band is offering for free through their websites, so you can't really complain about the value. If all bands offered their cover albums/EPs in such a format, it would be a blessing for fans, so Netherbird has a generous streak that should be taken into account.

Two of the covers would seem predictable here. First is "As I Die" from the Paradise Lost album of the same name, and Netherbird do a fair job of sounding like the original, only with the more lavish touches of Nephente's cutting snarl, more atmosphere and background femme vocals. Sentenced is represented here with a cover of "Nepenthe", which I'm assuming is where the singer took his stage name. Again, use of female backing vocals and a little more atmosphere than the original might have had, but honestly Nephente does a decent Taneli Jarva impression, and it might be the best of the four songs here. More surprising is the inclusion of "Alice in Hell" by Annihilator, but the thrashing rhythms sound reasonable here with a bigger modern production, and the band has taken some liberties in adding synthesizer orchestration that at least makes for a creepy haunted house vibe. Last but not least comes the cover of Swedish rock band The Soundtrack of Our Lives "Firmanent Vacation", from their debut. This is given a suitable melodeath injection which honestly works like this.

It'd be difficult to recommend this EP to fans outside of Netherbird's base, or difficult to recommend it at all, since it does not contain original work. But offering cover compilations to your fans for free is a wonderful idea, I just don't happen to be one of them. However, if you've ever wanted access to the influences that make Netherbird tick, here is a small window into their world.