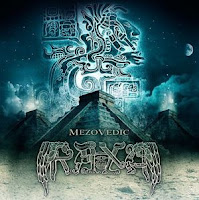 MezoVedic is the 3rd album in 3 years from Lefthander's Raxa project, and it's thus far my favorite. Whereas Rabinal Achi has lost a lot of its staying power, the writing on MezoVedic is such that it thrives well after you listen to its mystical progressions, a wondrous journey into the ancient culture of Central America. Yes, I often find myself thinking back towards this album, eager to give another listen, though it's not quite perfect. The major improvement here is in the guitars, they no longer feel like mindless drudging serving only to enhance the synthesizer-scapes with a low end; instead, they are riffy and a pretty important piece of this puzzle. There are sequences in which they play the major role, over the drums, bridging more tranquil ambient and folk segments of the songs.

Another difference is that more of the vocals and song titles are in English...which I'm not sure I prefer, as I feel the subject matter has more impact in its native tongue. But in all likelihood this will help increase Raxa's listeners, since so many suffer from a language barrier in their musical choice. The production of MezoVedic is the richest of the three albums, as each synth swells, acoustic glistens and vocal scrapes the guttural bottom edge of Lefthander's range. It feels the most thought out, and the songs, though longer than the previous works, are much stronger on average.

"Matenextic Peutica" is over 8 minutes of lush tribal beauty, with perfectly placed ambient synths that eventually roll into a tranquil acoustic above the percussion. The keyboards that follow are quite proggy over the driving chords, and the song has some sheer metal breaks. "Ember Beads of Time" starts with another acoustic part, though this one feels somewhat outside the Mesoamerican theme. "Zul's Howling in Necrolatric Bubastis" is one of the catchier bits on the album, opening with some great synths and cheesy keyboard claptrap drumming that I actually found endearing, before the chugging doom. "On the Twisted Way to the Eagle Tribe" has some groovy bass alongside its grim acoustics, and "Venus" is a brief ambient techno break that leads into the graceful, gliding doom of "Even, Wept Over the Absent". Another great track is "Darker Than Pralayan Night", which creeps along with a subtle texture but builds a wonderful, gothic pattern of notes. "Incumbent Kadingirra" returns to a tribal metal onslaught, and the album closes with the strong instrumental "Calm in the Hall of Two Truths", evoking a glorious melody.

MezoVedic probably takes the most liberties with its thematic material, as far as the music it often doesn't differ from other gothic/death/doom artists, but there is just enough of the remnant beauty of hteir debut Oxlahun Ti Ku to maintain consistency. The album sounds quite good, certainly a cleaner and more professional offering than his previous two. The lyrics are in a perfect Eng-russ and beautifully evoke the images of ritual and living in Raxa's historic world. This is the 'go-to' album as far as this band, and it slightly edges out Oxlahun Ti Ki for the best overall work.