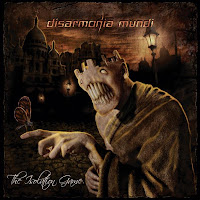 Disarmonia Mundi are a pretty good melodic death metal band, as far the few worthwhile in the style hailing from outside of Sweden or Finland. But there's just one hangup...they sound almost exactly like Soilwork. Part of this is Speed's presence as the perpetual guest vocalist for the band...but that's not the only comparison. The riffing patterns and momentum of this album sound exactly like Natural Born Chaos. So if you loved that particular album, or perhaps its followup Figure Number Five, this feels like a continuation, with slightly busier riffing and another vocalist in there (Claudio Ravinale). Within the disc you'll find the standard accumulation of grunts, barks, Strid barks, and then the emotional, clean, radio friendly chorus parts which were pretty much perfected already by Soilwork.

For some fans, who have already heard the past works of Disarmonia Mundi and are aware of the comparisons, this is probably a glowing recommendation. But it's also a crutch, a huge crutch, because when listening through this it just made me want to go back to that other album. The Isolation Game is their fourth, and it has all the trademarks of modern melodic death: great production, powerful grooving guitars steeped in transient melodies, keyboards, an onslaught of vocals coming at you every which way, and a few breakdowns. Not every song sounds exactly like some carbon copy of Soilwork, they put a few twists and turns in the mix and to be honest, they are like an extreme twin sister for the Swedish act. Tracks like "Blacklight Rush", "Losing Ground" and "Building an Empire of Dust" certainly build up a sweat, and there are a few brief breather tracks with acoustic guitars like "Glimmer" and "Beneath a Colder Sun". Probably my favorite track was "Same Old Nails for a New Messiah", though it is one of the tracks that sound smost like an outtake from Natural Born Chaos.

Basically, if you enjoy modern In Flames, Dark Tranquillity, Black Dahlia Murder, or any of this stuff, you can smell what these Italians (and one Swede) are cooking. But unlike other recent melodeath albums (Insomnium, for example) they're not adding quite so much to the genre as they are filtering it and creating a purified strain. I certainly did not hate The Isolation Game, it is a well written album with positive energy and pro sound, but I just felt like I had heard it all before and had become numbed to its charms.