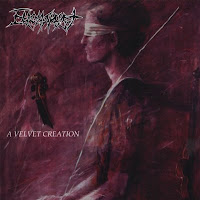 Melodic death metal is pretty much a household fact of life for the metal head of the 21st century, but 16 years ago, very few bands were promoting it. Eucharist was one of the formative artists to adopt and help mold the path it continues to blaze today, after a few turbulent years that involved an early breakup (the band was formed in '89, but this album did not see release until 1993). Upon your first listen experience with A Velvet Creation, you'll notice that the band did not sound much like their peers, with a melancholic spin on the style that was a little closer to the death metal aesthetic. The album is distanced from the brutal variety, but the melodies were a little more subtle than the classic power metal tint infused into the sounds of Dark Tranquillity (whose debut Skydancer also debuted this year) and In Flames (whose debut Lunar Strain would arrive in 1994). The riffing was more carnal here, despite the gothic elegance of the lyrics and songwriting.

There are some advocates who would tell you that A Velvet Creation, and Eucharist, were superior to either of those bands (even At the Gates), but here I must disagree. Though the album flows from front to back with a delicate balance of grace and terror, the individual songs don't stand out nearly as much as the forthcoming mid-90s classic Slaughter of the Soul, The Jester Race, or The Gallery. In retrospect, this debut is a decent curiosity, but nothing more, and it was soon buried in the piles of praise for its peers. Drummer Daniel Erlandsson would himself leave for In Flames and Arch Enemy, touring and a few substantial paychecks, and original bassist Tobias Gustafsson (who played on this album) would depart to Armageddon.

Alas, my intention is not to sound too down on this album, because it's certainly not bad. But, unlike wine, it has not grown any tastier with age, and my moderate appreciation in birth has not increased through the years of adolescence. Classical acoustic guitar pulls and plucks its way into Erlandsson's double bass and the righteous old school death rhythm of "Greeting Immortality" (from their earlier demo), while Markus Johnsson's vocals tear across the realms of black and death metal infinity and his bass thunders below. The song was pretty popular in its demo days, and a natural choice to open the record with some class and energy. "The Religion of the Blood-Red Velvet" moves at a mid pace, with grim yet festive churning and chugging guitars balanced with simple, complementary melodies. Like most of the material here, it's good, just not great by any means, nor is the following "March of Insurrection", despite its steady thrash chugging and raw, emotional bridge that leads into an average melodic death charge. "My Bleeding Tears", despite its rather emo title, starts with a drum battery over bass plodding and then a pretty powerful rhythm, though this doesn't stand still for long as the guitars erupt into a pair of bleeding tears steadily rolling down the blinded eyes of the cover figure. The bow sound at the 1:30 really adds to the gothic atmosphere of the track, and Johnsson's pulls out some nice bass lines that swagger below the guitars at around 2:10.

Like a lot of melodic death in these days (as well as early gothic metal), the lyrics read like so much empty poetry. But at least they match the album's atmosphere and the solemn guitars. "Floating" commences with some more acoustic lines, and then develops into some pretty cool guitar effects and leads that wind through the verse, probably one of the deeper and more interesting tracks on this album. The title track is my clear favorite, with some great tone to the dual, driving guitars as they thread their woeful notes through a saddened black heart. When Johnsson's vocals are matched to this rhythm a little later on, the album becomes sheer bliss, if only for a moment. "Into the Cosmic Sphere" has a good charge to it, with even more of the subtle, dual melodies that were the signature for their sound. Another great riff here, at 1:30, gloomy and gorgeous, and beneath the vocals, it bears a lot in common with early melodic doom ala Paradise Lost. "Once My Eye Moved Mountains" is a killer song title and one of the album's better pieces to boot. Though the verse strives over a pretty average melodeath riff (which we'd be hearing, many thousands of times over the next decade or so), the lead is fairly infectious and the whole song quite energetic.

There are no hidden surprises here. The album might sound a little thin to the modern ear, but this is really how its melodies manage to shine through. I rather prefer the honesty of the atmosphere to many of today's severely overdubbed, digitized, sterile recordings. As for the writing: half of the songs are good, the other half average, the lyrics a mixed bag, and nothing here that I'd go out of my way to hear. But if you've got a nostalgia for the roots of this style, you'll find it was a pretty obvious influence on many bands to follow, and it's palatable enough alongside a glass of bitter sweet wine, Skydancer, and the first two At the Gates records.

Highlights: Floating, A Velvet Creation, Into the Cosmic Sphere