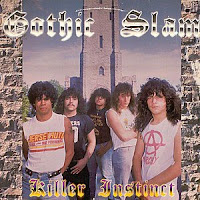 When we think of big city East Coast metropolitan thrash metal, we always think first to Anthrax, S.O.D., M.O.D., Nuclear Assault, and Overkill, the most enduring and prolific bands to strap on the axes and conquer Headbanger's Ball. But hanging just below this frothing, moshing royalty by the straps of their hi-tops was an entire legion of hopefuls. One of these was New Jersey's Gothic Slam, who put out a pair of fun but forgettable albums that earned them a little circulation but ultimately, not much long term popularity. Replete with the same curly brunette do's and don'ts that helped push Anthrax into stardom, the fivesome issued Killer Instinct through Torrid Records in 1988, and the rest was...well, not exactly history.

The sound of Gothic Slam was like being beaten into a brick wall with an aluminum bat. Crunchy and bludgeoning thrash and speed which, like fellows Overkill and Leeway, had a streak of that tough guy NY hardcore influence which infused their sound with some street level credibility and mosh readiness. Vocalist Daniel Gomez had a tone not unlike the lower range of Bobby Blitz Elsworth or Eric A.K. Knutson, but he often put a little extra emotion into the notes (moreso on the second album) which could remind me of Leeway's Eddie Sutton. The riffs are the best part of the album, brick wall after brick wall of forceful domestic violence. They're not of the variety that stick around in your head long after the album ends, and compared to many other thrash records this year they seemed quite pedestrian. But at least they were knocking over the other pedestrians, rather than kindly standing aside.

Gothic Slam want to make their intentions clear up front, so the song "Skankin'" opens with a ska riff before Gomez exclaims: FUCK THIS and the band lurches into a shithouse S.O.D. Speak English or Die slam rhythm. This probably seemed pretty profound at the moment, but remains at least good for a laugh. The rest of the track is the typical, average speed anthem which celebrates the very present art of the metal show through its lyrics about moshing and stage diving. "Living to Survive" reminds me of earlier Overkill, a simple thrusting rhythm that does not stand out much. "Stryker", the band's original namesake, has a slow, evil groove with some nice guitar fills before it churns into another of those big S.O.D. chug rhythms, and "Bedlam" opens with some bass and jamming melodies, with a good groove and some gang shouts. Easily one of the better tracks here.

As is "Tormentor"! A deep synth tone strikes a few nerves before a march rhythm and then some tight, flowing guitar work akin to what Helstar were writing at the time. The vocals are wild here, and the song pretty thoroughly rocks, with good bass and guitar solos. "Killer Instinct" has some more Overkill moments, wall of gang shouts and more frantic leads. "Stand Up and Fight" went straight through one ear and out the other, but the last track "Fought for Death" had a little bit of a Judas Priest/Accept power-metal edge to the riffing, and at least 1-2 cool riffs.

I had so many great thrash metal albums to listen to in 1988 that they curbed off my puberty until the awkward age of 15-16 and that startling discovery in the shower one morning. Against such a load, Killer Instinct could simply not hold up. But even 20+ years after the fact, this is not a terrible album to throw into your stereo and ironically lumber about the room like a construction worker struck in the head by a falling girder. Total street neanderthal thrash metal, somewhere between Overkill and Demolition Hammer.