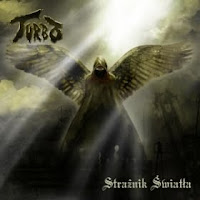 Turbo is a legendary band in their home country, one of the finest offerings in the metal market over there, but they have gone largely unnoticed throughout the rest of the world due to the language barrier. Most people, it appears, simply do not want to listen to music with foreign lyrics...and Polish is not high up on the list of possible exceptions. As for myself, I could care less, and most of my favorite musical artists (in all genres) sing in other languages. I may not understand them, certainly don't have the time to translate them all, and thus cannot praise or condemn them, but they never hinder my enjoyment. It's a shame that more have not listened, because Turbo write some pretty damn fine metal music, with an emphasis on the classic sounds of NWOBHM and 80s power metal, but the ever-encroaching hint of thrash (which has featured more prominently on some of their older offerings).

Strażnik Światła is the 11th album from these seasoned 'bangers, and a fine culmination of form. You'll hear elements from the early years, a little of the youthful thrash energy, and most importanly, an attention to songwriting. Nothing here is going to blow your mind, there is nothing ambitious or fascinating about what Turbo conceives, and if you are under the age of 30 and not cool, just step away. It's just good heavy metal, no more and no less, with as much melody as aggression and can be expected from some guys who grew up in a different time. This is only the first album to feature Tomasz Struszczyk vocals, and his voice is a lot less aggressive than his predecessor Grzegorz Kupczyk, but then, so is the music.

A somber guitar "Prolog" cracks open the album with bluesy abandon, before the distant dual melodies of "Na Progu Życia" simmer, slowly taking form into the rocking rhythm of the verse. Struszczyk sounds good from a melodic standpoint, even if a little safe and reined in here. But "Szept Sumienia" is a little heavier with a crisp, mean grooving guitar riff, and Tomasz gets angrier, but creates a great, climbing melody over the chorus. The lengthy title track "Strażnik Światła" has a great intro, which slowly broods into more dual melodies, and then picks up into another charging rhythm, where the vocals mix pleasure and pain into the big chords of the chorus. Other ragers on the album include the stomping good "Niebezpieczny Taniec", the infectious, Maiden-like "Obietnica Lepszego Dnia" (plus wah wah), and the other Maiden-like piece "Noc Już Woła". The band also try their hands at a 7+ minute instrumental "Tunel", with a lot of hammering and shredding rhythms.

Turbo sound like a bunch of pros here, much like they have for years now. They weren't born yesterday, and there music is not going to appeal to anyone who was. Again, not revolutionary, but it's fairly well written, epic heavy metal which failed to bore me even when the tracks were on the lengthier side. Only the balladic "Na Skrzydłach Nut" would test my patience, as it sounds like a Polish Skid Row doing a power ballad, and the one good riff in there (at around 4:00) is not enough to save it. This is not as thrashy as some of their previous work, so I also would not approach it with any such expectation.