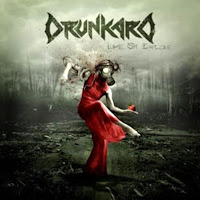 The Greeks have got a nice little thrash scene going on right now, what with bands like Released Anger and Suicidal Angels putting out decent albums, and Drunkard returning after 5 years for their sophomore effort. Retro thrash this is not; sure, you can hear most of the usual suspects in the band's sound, like Slayer, Exodus and even a dash of Artillery, but the vocals here are much more of a death metal style and I would compare their overall sound as strongly to something like The Haunted as I would to anything from the 80s. Like Sin Explode is certainly not an innovative release, but if you want your thrash on the modern side with a side of beef, marinated in brutality and an attention to THE RIFF, then get out your preferred credit card.

This is one of those albums which starts with a metal mosh instrumental, akin to S.O.D.'s Speak English or Die. "Kiss of Mayhem" should work up the Greek pits into a slathering horde of thrash zombies before "King Death" blows them to smithereens with its forward momentum and Artillery-like guitar work. I especially enjoyed the choppy little rhythm at :30. "Like Sin Explodes" with a battery of chug chug chug chug as guitar fills grind off into another exciting volley. "Bloodcrown" breaks forth another busy rhythm ala Artillery, as Savvas Panzerfaust carnal, deep throat tears alongside the axework like some freak the band sprung out of the local mental ward, who for some reason didn't get the notice that this wasn't a death metal band. Of course, it's a completely functional union, and the band jams out a half dozen further songs, the highlights of which include the slamming "Serpent Terror XXX" and creeping closer "Murder Carnage".

Like Sin Explode is a thick and polished record with every metallic bassline sounding like a steel pipe being gently crammed against your skull. The thrash is STRONG within this one, and THE RIFF is never ignored to phone in some dull piece. Sure, there are a few tracks slightly weaker than others, and after listening you don't feel completely blown, but it's difficult to put this on without injuring oneself, and it's far superior to a lot of the other new 'thrash' metal we're hearing these days, as well as the band's own previous effort Hellish Metal Dominate.