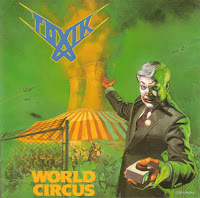 Toxik are another of those 80s bands who, for some inexplicable reason, did not quite reach the level of success that their music was more than capable of. A frenetic, screaming debut of NY thrash and speed metal, World Circus is an explosion of hyper riffing and intensity that often borders on ridiculous due to Mike Sanders' agonizing shrieks. But the riffs...oh, the riffs here are consistently busy and more often than not, as catchy as an STD in a third world slum. Of their two full-length releases, this is the more crude and barbaric, favoring the relentless speed metal of the day, yet the roots of the band's future progression were already being laid.

My first exposures to the album as a teen were mixed, as I considered the band to be nearly out of control and the production of the album and screaming vocals often hurt my ears. Repeated listens, however, have assured me that it was simply a lack of preparation for what I was to hear, and this is actually a decent effort. But one does have to get past the vocals, which are far more uncouth than a Halford or Tate and often too shrill and self-indulgent for their own good, or for the songs.

"Heart Attack" is an accurate description for its own riffs and the cruel sorcery of its siren-like chorus wailing, gleeful and mischievous speed, which mocks at you from the proverbial big top of the album's cover art. As kinetic as the track feels upon first contact, it's actually a sequence of tightly controlled rhythms over which Sanders' antics work rather well. "Social Overload" has a pretty badass verse, with Sanders crying off into the background, the bass of Brian Bonini popping along under the mean and dirty rhythms, and an almost mechanical aptitude for destruction. "Pain and Misery" is perhaps a little too shrill, though Sanders offers a crystalline performance over the low, grooving hard rock breaks of the verse. "Voices" features some rather interesting guitar lines, sporadic and melodic and a nice foreshadowing for the direction they'd often move on Think This. "Door to Hell" is one of my personal favorites here, for the excellent riffing that opens the track and the ascending melody which breaks into its full throttle charging.

Put there by liars, the money messiahs, decay, obey
Shoot, kill, good will, God is on our side
Don't ask your task, do what you must do

Following is the memorable title track, which features an intro sample of nuclear winds that erupts into a metallized carnival melody, and then a thrust into the delicate balance of complex chaos that inaugurates the chorus. A lot of wild leads follow over some solid mid-paced thrashing, and yet another circus slaughterhouse. At this point, Toxik are perhaps wise to offer a great acoustic instrumental "47 Seconds of Sanity" and then a pretty tight track in "Count Your Blessings", where Sanders really shines like a glaring warning from the depths of the psyche. "False Prophets" delivers a fast flurry of axe wizardry, and "Haunted Earth" is another of the album's very best tracks, with great backing shout vocals that build over its excellent post-apocalyptic street level riffing. "Victims" is as wild and riotous as anything else you'll find on World Circus, ending the debut with a loud power thrashing bang.

I still can't say today that I love the sound of this record completely, but it certainly does wonders to elevate the high pitched lead squeals and vocal squeals that dominated the band's sound and gave them a notoriety within the metal underground. This was a band with enough raw technical ability that guitar university freaks and thrashers alike would answer to their thrilling tones, and World Circus was a pretty good introduction that the band would later develop in nearly every category. Not every song here is equally catchy, but if you like bands that are long on the riffing and screaming then I very much advise you to give Toxik a listen.