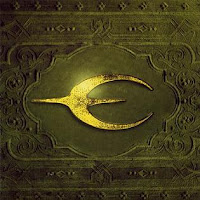 Four years passed and the follow-up to A Velvet Creation would rear its head at last, after another brief breakup. In the meantime, At the Gates and In Flames had blown up into international metal superstars, Arch Enemy and Dark Tranquillity were starting to take off, and At the Gates had already broken up. Melodic death metal was a pretty well established style, a still-rising star that would serve as a gateway to many younger metal fans who were poisoned with nu-metal, and a breath of fresh air for jaded metal fans who found no value in death, black and grind extremity, seeking a return to the accessible melodic songwriting they grew up with in the 80s.

Aye, the world was ripe for the picking, and Mirrorworlds, the second effort from Eucharist, was a more modern effort with a bigger budget appeal than its predecessor. For reasons above and beyond that one, I do like this record a little more. The songs rock a little harder and there are some interesting moments. It's still not a classic, and for some reason, the band once again failed to draw much attention. I half expected this to be huge, seeing as the genre was exploding in popularity, but it only sealed their fate, with Erlandsson moving on to stardom with his countrymen (he had already recorded with In Flames during this band's hiatus betwen albums). Thomas Einarsson and Tobias Gustoffson had left the band prior to this recording, but Markus Karlsson joined on bass, making this a 3-piece effort.

Spacey noises announce the arrival of "Mirrorworld", and though one could immediate note the thicker guitar tones and lavish, newborn intensity of the band, the lack of the A Velvet Creation's sullen atmosphere would likely steer some away from the sound. Granted, Eucharist still had their own, somewhat distinct approach to this genre, but there was an infectious, modern energy that would be able to compete with the Whoracles, The Minds I's and Steelbath Suicides to come. "Dissolving" had an emotional, climactic pace which ran parallel to some of In Flames' work, big hooks and somber melodies that drifted above Johnsson's tortured throat. "With the Sun" blasts and breaks and blasts into another big rhythm, though it slows into more meaty mid-paced melodies and an acoustic outro. "The Eucharist" builds a grooving rock rhythm, crested by dual melodies, and I dug the echoing, atmospheric line that would conclude the lead around 3:30 in the track. "Demons" has some more rock to it (kind of like a premature Hearse), alternating the blues with some great outbreaks of death metal chaos.

In the twilight a bestial drama is being enacted
Her legs are separated as my tears fall on her breasts...
...oh, I fuck her...

Not only had the band upped their ante musically, but the lyrics here are also a little more fiery, if still poetic and lavished in gothic imagery. "Fallen" is my favorite song on the album, with a pensive gait that erupts numerous times into melodic bliss. Once more, there is a rock feel to the writing, similar to Hearse or some of Arch Enemy's material on Stigmata and Burning Bridges. "In Nakedness" makes great use of a horn and some acoustics to build an urbane, folk atmosphere. It's an instrumental track, with metal nowhere to be found, and one can't help but feel it's a dismissal of genre that foreshadowed a dismissal of Eucharist's future. But "Bloodred Stars" rides off into the sunset with a pretty killer, driving hook and some great bridge melodies akin to the debut album, so it all ends on a high note.

Ultimately, Mirrorworlds is superior to A Velvet Creation in many areas. About the only thing it lacks is the raw sincerity of the prior's recording. For most listeners, though, this is not likely to be an issue. The lyrics and most of the songs are more entertaining and energetic, with fine performances from the two original members. You could do worse than reach back to the year of 1997 and give this a spin, and I honestly prefer it to Dark Tranquillity's album that year (The Mind's I). This isn't perfect, and I suppose it doesn't stand on the longest of legs, but there are a few gems to dig up when the urge arises.

Posted by autothrall at 9:54 PM