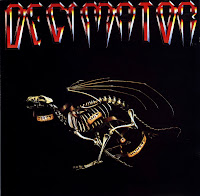 If the Carnage City State Mosh Patrol was an odd little duck in 1989, I can only imagine how out of place its follow up would have seemed in 1993, when brutal death metal, grunge and nu-metal were the new darlings of 'extreme' music and all the rage for legions of angst-ridden tits who were trying to find an identity in a rapidly modernizing Western culture. Decimator had not grown much in the four interim years, and while Dirty, Hot and Hungry has a technically superior production standard, the actual style of their songs had not budged an inch. They also adopted a hot new logo here, and I don't mean hot as in attractive, but hot as in it will burn your eyes out if you stare at it too long.

The pseudo-Judge Dredd motif had not abandoned the band at this point, there are still a few tracks which pay tribute, and even a 'sequel' to one of the songs from the debut. Mad Dog is still up to his old, deep throat vocals, though the band uses a few more gang shouts and a higher pitched, snarling vocal at times. Otherwise, much of what you hear on this is 100% loyal to what they were playing on C.C.S.M.P., and if you got a few gags out of that then this might also bust you clear in the gut.

"Red Eye" has a very Venom party rock feel to the verse, but the riffs are tight and there is at least a little thrashing to be done, though the band maintains its old school metal streak even here. "Dirty, Hot and Hungry" has some interesting clean, surf/spy guitars that ride the wave of the thrash rhythms, like Lemmy and the boys scoring a James Bond parody. But, as lame as that might sound, it simply does not stand up to the horror that is "Sixteen Six", which is as amusingly funny as it is awful. Mad Dogs grunting is offset with some 'narrative' vocals over the subdued thrash bridge, and it sounds like something Ghoul might do, if they were around back then. "Flight 19" is one of the better pure thrash tracks on the album, concerning the great aviation mystery of 1945. "Mutant Lieutenant" starts with a scratch and the sampling of a rapper, and riffs that sound almost exactly like "No Sleep Til Brooklyn" if it were re-arranged with Mad Dog on the vocals. This song is a fucking abortion, and the band should seriously have thought about excluding it from the final product. The fact that it breaks into a half-decent bluesy metal riff with screaming only adds salt to the wound...had they stuck with only that riff and built around it, they might have had a decent song.

The latter half of the album fares little better. "Carnage City Rocks" is fairly low balling, simplistic thrash/heavy metal which might have worked as a bad Saxon or Judas Priest knockoff if not for Mad Dog's very different vocals. How "Stealer of Souls" got a sequel is beyond my comprehension, but here it stands, and surprisingly it is one of the less heinous tracks on this effort, with some nice melodic thrashing in the bridge. "T.R.I.P." starts out as a miserable, swaggering boogie/hard rock song which makes Jackyl sound genius in comparison, and then tries to thrash it up unsuccessfully. The band ends the album with another Dredd reference in "Megazine", an organ opening the tune and Mad Dog sounding like a mix between himself and a little Martin Walkyier (Sabbat, Skyclad). It's a decent tune, but also their last, and I can't really call it a high note to end on.

That's right, folks, two full length albums on the once mighty Neat Records and Decimator would call it a day. The band simply could not achieve notoriety in an age where so many more catchy and complex artists were putting out landmark albums, not only redefining genres but creating new ones. Sadly, Dirty, Hot and Hungry would be a weak effort even if there were no other music heavier than the Beatles at the time. It's no surprise this band went by unnoticed, but if you ever feel a curiosity to track their work down, start with the better debut album. It's not great itself, but less likely to induce vomit and midlife crisis.

Highlights: a few songs of the don't suck...