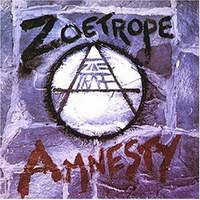 Zoetrope ('e trope') is another of the bright young flames of the 80s, snuffed out when the scene's interest shifted from thrash metal towards other forms of entertainment (grunge, 'alternative' rock, and so forth). But during their prime, they were a pretty good band, and one of the few I would proudly label 'street metal', as the band did. That is to say their songs evoke a low to middle class feeling of bars, rumbles, and crime, all in a crispy speed metal shell which balances both a 70s hard rock/NWOBHM influence and the same punk/hardcore source that helped birth the thrash metal genre. Zoetrope were already in existence for some time before this album, forming in '77 and dropping their first demo a few years after that.

This is a band probably best known for the vocals of Barry Stern (also the drummer), who had a dirty barroom style full of urban anger and expression, and the solid riffs of Kevin Michael, which are huge enough to sate an arena full of headbangers, but hail from the concrete and gutters of the Windy City and its surroundings. Amnesty is one of those timeless recordings which sounds as fresh today as it did nearly 25 years past, and there is a charm to it difficult to place, even if I wasn't enamored with every single track.

It begins with the slower, hardcore rhythm of "Indecent Obsessions", as much Sabbath as punk, and then picking up the pace with a pretty explosive thrash riff, and lyrics about that peeping tom or pervert we have all heard about, through several scenarios. The chorus is basic but memorable, evidence that Stern, though wild and throaty, had the chops and just enough range to deliver alongside other hard rock or metal singers. "Kill the Enemy" is the usual anti-Hitler, megalomaniac ranting, but the guitars are just as driving as the first tune, and Stern adds a little bit of a melody (or scream) to the end of the verse lines, which cycles nicely into the obvious chorus. "Mercenary" kicks into some drums and bluesy, over driven melodic leads before a mid-paced thrashing and excellent chorus vocal, and the title track has a feel of Motorhead meets early Tankard (though this was pre-Zombie Attack). "Member in a Gang" is an honest, blunt title for a scorching, dirty hard rock tune, with a great grungy tint to the guitars.

It don't mean that you're clean, because you ain't killed nobody
Because you know every ruthless scumbag, and that's no lie
But when it's time to get in line, your fear starts to show
But it's your obligation to the devil, because you're a member in a gang

This dirty streak continues, as "Break Your Back" only sounds a few notes away from the iconic "Ace of Spades", albeit more of a US, blue collar steel mill take. "Another Chance" has a solid rock & roll riff for the verse, and then a nice, grinding bridge with some of Stern's best vocals on the album. "Creatures" is a horror-themed tune about the walking dead, and a bruising, cruising guitar rhythm with gang shout chorus, and a groovy ass thrashing bridge. Possibly my favorite song off Amnesty. "Trip Wires" is the finale, opening in a Sabbath-inspired crawl and then busting out some gritty punk metal.

There are very few audible flaws to this album, and it rather perfectly captures the 'street' sound the band were peddling. The sound is excellent, savage and raw without losing the melodic edge. Perhaps the lyrics aren't all that great, or the riffs themselves entirely memorable. It's basic fare, but delivered with an honesty and passion that transfers well into the follow-up, A Life of Crime. This is still a good time if you're cruising around your local urban decay and want to spark up a riot.