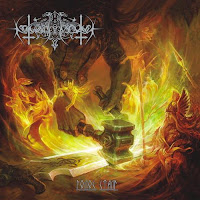 Speak what ills you wish of the checkered past of the Ukraine's mightiest band...their ideologies, their hostilities, their gimmicks, and their unshakable ability to develop an increasing cult following in the face of a world that defies just about every lyrical message they pen. Nokturnal Mortum are capable of some pretty incredible music when they set their minds to it, and The Voice of Steel is the best album they have produced since To the Gates of Blasphemous Fire, 11 years past. The sound is huge and swelling, and I would dare to say this is their most accessible work, sure to enthrall the masses of come-lately pagan, folk and melodic black metal as much as the band's original fans. But make no mistake, the convictions remain firm, and this is no flighty journey into a friendly song, but a herculean effort of pagan metal that bathes in the glory of past fires and winds. It's fucking unbelievable.

The lineup here is a little different than the previous Weltanschauung. Varggoth remains on the vocals and guitars, and he sounds intense here. Saturious handles the keyboards and folk instrumentation, and they are joined by bassist Vrolok, drummer Bairoth and Astargh on the other guitar. They are also joined by several other contributing guitar players for several of the leads, as well as former fulltime members like Odalv. Yes, you could consider this some grand woodland meeting of all a near army of Ukraine's warriors, and the songs produced through The Voice of Steel shall surely become their anthem.

The horns and strings of the intro resound across the hills and copses like a narrator of ancient glories that speaks in winds, while the percussion of the earth rises to stoke the forge of our inevitable armageddon. "Голос сталі (The Voice of Steel)" arrives with thundering drums and drudging, barbaric guitar lines, before the strings conjure forth a bold orchestration, somewhat akin to Graveland if he was rocking a 30-40 piece orchestra. Vocal choirs, gnarled Varggoth vocals of Eld, and rousing flute bridges conjure one of the most powerful Northern folk metal tunes of the year, and for nearly 10 minutes you are savaged by this renewed, vital band. "Валькирия (Valkyrie)" marches across you like an entire army of risen warrior spirits, a solid block of symphonic black metal that recalls some of their stronger work of over 10 years back. It's beautiful, graceful; never once does the blade dull for over 10 minutes...even when they pull out a blues solo over the tribal folk of the mid section. "Україна (Ukraine)" could not be a more fitting tribute to the band's beautiful homeland, glistening with lovely strings and a powerful atmosphere that makes Arkona look novice (and I love that band).

The album takes a somewhat more progressive turn with "Моєї мрії острови (My Dream Islands)". It still maintains its incredibly dense atmosphere, but subtle synth rhythms and curious riffs burrow themselves into the walls of bristling spear-guitars that provide the brunt of the charge. "Шляхом сонця (By Path of the Sun)" is as broiling and catchy as the surface of the star it worships, with a glorious verse in which the vocals turn more cookie monster and manly, as the drums storm through the heavens. "Небо сумних ночей (Sky of Saddened Nights)" is a brilliant acoustic folk track, with amazing vocals and despite its brevity (well, 5 minutes if brief only when compared to its neighbors), it is one of the best songs of their career. But Nokturnal Mortum will hit you up for one more, 12 minute epic to close off this bold effort, and that is the brilliant "Біла вежа (White Tower)", which evolves through beautiful synthscapes and proggish folk wanderings into a savage majesty that calls the heart of every man to war.

Yeah, The Voice of Steel pretty much knocked me out of my seat and back through the centuries to touch my inner pagan. The sound on this album is just unreal, so much depth delivered through so many layers, and not afraid to incorporate a subtle touch of modern sounds into its rolling glories (soundtrack swells, even a little lush 80s New Age pop). This album is not quite so brutal and effective as To the Gates of Blasphemous Fire...that is to say, of the 71 minute playtime, there may have been 1 or 2 minutes in which I was not entirely enthralled. Which is not enough downtime to offer it less than the highest accolades. It's a little less dark, quite bright and positive feeling than previous albums, honestly, and for this reason it may be a 'first' for many who did not previously enjoy the band's catalog. But Nokturnal Mortum lose nothing of their desperation, of their message, or integrity here...it's just a stunning piece of music that honors both its influences (Graveland, etc) and its culture.

Holy... Unholy crap, I mean. Aww hell, this is incredible. And I'm only three songs in. :D