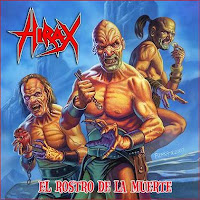 I am always encouraged when I see a true thrash band like Hirax, obscure in the 80s but having maintained a steady cult following ever since, still plugging away endlessly. Katon W. De Pena is an elder statesman of the thrash metal genre, but even though the Hirax releases this century have been consistent and loyal to the sound they helped pioneer in the 80s, I can't help but feel that their best days are long behind them. El Rostro de la Muerte does not exactly suck, in fact it's a respectable and solid full-length album with 14 tracks and a whole lot of mean attitude. But as far as the riffs go, there are very few here which feel as if you haven't already heard them a hundred times, leaving only De Pena's wild versatility as a frontman to entertain you.

He barks, he snarls, and he is the one man alive who can merge almost soulful tones with a harsh rasp ala Mille Petrozza. He takes tracks which are otherwise snooze fests that any thrash guitar player could write in 10 minutes, and makes them that much more edgy in the process. Most of the first half of this album blazed straight on by me without much to appreciate, though Pena really sets "Eradicate Mankind" on fire. Later, better tracks begin to appear like the rampant Slayer-ism that is "Horrified"; the total slugger "The Laws of Temptation"; and the closing 'epic' "Satan's Fall". But, as far as these are in the short term, they still lack for any amazing riffing that will make you want to put them on repeat.

Where El Rostro de la Muerte does NOT suffer is in the production. It's dense and destructive and as explosive as a mosh pit this band must see on a normal night of touring. The bass is thick, the drums smash and the guitars are just perfectly toned to blow up all of your speakers. Pena's voice cuts through like a cheap set of warehouse knives you bought through an infomercial, and I did bang my head during a few of the songs. It all sounds almost as powerful as Destruction's post-reformation masterpiece The Antichrist. If these same tones had been married to a set of memorable tracks, we'd have one of the better thrash albums of the year. Alas, it's just a violent good time that you will forget shortly after.

Highlights: Horrified, The Laws of Temptation