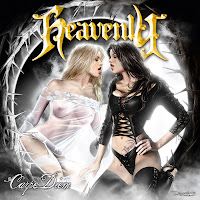 Heavenly were probably wise to catch your eyes with the 'sugar & spice' of the cover art for their 5th album, because the album itself is a mixed contrast with some great, busy guitar rhythms and a vocal performance that leaves a lot to be desired. I've always gone back and forth on their releases...the band started off with a very similar, anthemic sound to a French Helloween or Freedom Call, but have since developed into something a little more unique. That being said, I think the band peaked on their 2nd and 3rd albums, Sign of the Winner and Dust to Dust, which were both pretty epic. Virus from 2006 was decent, and Carpe Diem at least clings to some of its predecessors, but I had a positive reaction to only a few tracks.

The title track is first, which kicks off the album with some excellent, bustling guitar rhythms that create a polar opposition to the cheesy 80s Journey-like prog synths in the verse, or the often whining vocals of Ben Sotto. There is a female backing vocalist used here, thankfully for only a few brief seconds, and in the end, I really only enjoyed a few of the guitar licks. "Lost in Your Eyes" has a nice, symphonic forward momentum, where the guitars and synths really work in tandem, Corbiaux and Lapauze capable of some sprightly little melodic licks, but the song proceeds to grow more dull as it moves along, almost feeling like At Vance with a different vocal. "Farewell" sounds like a "Bohemian Rhapsody" from Queen, only a few decades too late and not good. I like the pounding bass that begins "Fullmoon", and it once again sounds like big 80s radio hard rock with a dash of power metal in there. Not so bad, but the following "A Better Man" is another mix of Queen and showtunes. "Ashen Paradise" uses a generic vocal choir pattern that we've already heard a thousand times, and of the remaining tracks, "The Face of Truth" is probably the best for a few moments of memorable, melodic intensity. "Ode to Joy" feels like Queen meets Helloween, and "Save Our Souls" a lot like Freedom Call with more annoying vocals.

Carpe Diem is not so different from the band's previous works that you will note much of a difference, but the delivery is just not so convincing. Clearly the band tries to incorporate a lot of their 70s and 80s influences, so they don't come across like another generic European speed/power metal act, but they're not always the tasty kind of cheese. The musicianship is tight, as usual, and the production of the album really meets the modern standard for its genre, but I find myself a little underwhelmed here, with only 2-3 worthwhile songs.

Highlights: Fullmoon, The Face of Truth