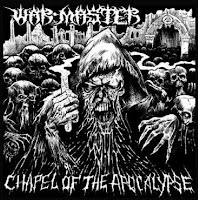 Judging from their name alone, you can be quite sure who this Texas band is paying tribute to most on their demo. And the sounds of their charnel house, low end grooving death rhythms do in fact ape a lot of what made Bolt Thrower great in the late 80s and 90s. I'm not going to accuse War Master of being some 100% ripoff of Bolt Thrower, because I'm sure this is done all in fun with that very idea in mind, and from time to time on the three songs here you might hear a slight influence from another prototype death metal bands (Death, Cianide, Carnage, etc).

"Chapel of the Apocalypse" is the first foray into the grim battlefield, with some churning and grinding guitar work that occasionally slows for some blood-soaked bombast. When the subtle melody comes in after 1:00, it begins to really sound a lot like something from War Master the album. "Awake in Darkness/Warplague" follows suite, with a groove and pummeling that often transforms into hoarse blasting akin to what the UK band used to create. "Thrones of Tyranny" is probably the best track of the three, really rekindling the lust I had for Realms of Chaos 20 years ago, with a nice, hostile production.

This leads me to the inevitable conclusion, though: War Master just isn't better than Bolt Thrower at being Bolt Thrower, and there is no reason to really listen to this when you have that band's catalog at your disposal. As an inspired tribute, the Texans are clearly aware of what they are doing...but the songs themselves do not excel beyond what you already have in Realm of Chaos, War Master or The IV Crusade. So I can't give it a gleaming recommendation. That said, I like the band's logo and cover art, the demo is pissed off and raw, and I could easily fantasize myself making a band called World-Eater and doing an identical project some day...so...well, your mileage may vary depending on how much more of the same you want to hear.