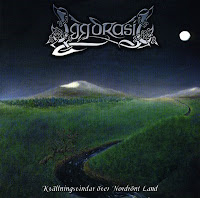 It seems to me Sweden's Yggdrasil is almost the perfect band for twilight idylls and festivals of the Elven folk, dancing their pagan lilts through the cold, rich woodlands of the seasons. I mean no insult by this whatsoever, for I refer to the Elves of Norse legend, of primal grace and forgotten, mythic beauty. No, this is not faerie metal in the negative sense that I generally loathe upon, but a real evocation of folklore. Kvällningsvindar över Nordrönt Land is the band's debut, with material culled from their two previous demos and re-recorded. It's a good thing they decided to honor these tracks and breathe them new life, because there is no reason songs of this quality should not have reached a larger audience.

Like their newer effort Vedergällning, this album is long on atmosphere, but where many pagan/folk metal bands clash at the crossroads of archaic instrumentation and black metal aggression, Yggdrasil makes it sound like the two were always unified, as they can flawlessly transition through moments of melodic, ripping guitars, violins and synthesizer swells, with a fiddle here, or mouth-harp twanging off there. The vocals are clean and forward, but they intone like dark bells hung from the trees of this ancient landscape. About the only thing I did not find necessary on the album were the female vocals or the 'shrieking' vocals, but these are few and far between and greatly outnumbered by the finer moments.

An hour of atavistic relaxation commences with "I Nordens Rike", from the 2003 demo of the same name, and its ambient sounds of sky mesh seamlessly into the developing guitar melodies before the chords crash forward into a lead like a thousand autumn leaves exploding as a steady breeze strikes the tree. The only issue here is the screaming vocals just before the 6:00 mark, which serve to do little else than annoy, sticking out like a sore thumb in an otherwise great track. "Kvällning Över Trolska landskap" transforms beautiful acoustics and a sad violin line into a thundering blitz of black momentum, though the real star is the following melody. "Frid" is a sullen, slower folk metal piece, and the 11 minute "Gryningstid" morphs from percussive guitar rhythms to glistening streams of melody, an interesting and fairly original style. "Nattens Vandare" once again uses muted with a percussive feel, but this is more of an Amorphis feel with some violins. Love the melodies in this track.

"I Nattens Timma" moves at a slow, drawling doom, as shining melodies cling to the broiling sequence of chords, and the vocals soar. "Vinter" is much the same pace, but with less of an upper end to the notes, and a little more of the gruffer vocals. Good acoustics, good mouth-harp, but the female vocals feel a little mediocre (though subtle). "Nordmark" is a blitzkrieg at first, of rather average pagan black metal, and the female vox later in the track are half tolerable. Which leaves the "Elfdance", or "Älvadansen", to finish out the record...with more female folk vocals, this time covering almost the entire track. In the beginning, they are restrained and catchy, but when Michelle Maass starts screaming later on, results may vary.

Kvällningsvindar över Nordrönt Land is, for the most part, a good album, but there are points at which it starts to unravel (largely through the female vox) and feel like an effort from one of the great many other, mediocre folk metal bands Europe is spewing like a geyser of ex-goths. The stronger tracks here have all the dense atmospheres and lush idylls of the following album Vedergällning, which is superior to this. But the debut sounds quite somber and romantic in an ancient forest fashion, and it's nice to have the demo material made 'official' rather than left to wallow in the dusk.