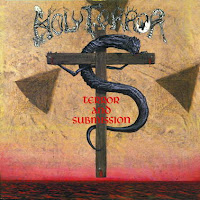 Where so many bands in the late 80s were trying to take the formula presented by Metallica and Megadeth and add some accessibility for success, there was another side to the thrash scene entrenched more firmly in the influence of Slayer, Possessed, Venom and the emerging German scene. Holy Terror belonged to the latter, and they had a sound that, by 1987 standards, was quite intense. Filthy, aggressive thrash metal which mastered both the elements of chaos and precision into a violent experience, like a Mad Max road race through the outlying deserts of the abyss. Keith Deen's apocalyptic vocals gave the band a grisly edge, but what really explodes off this recording are the guitars, which peel the rust off the abandoned cars that litter this hellish highway. Just as fast as Exodus, or Possessed, and about as complex.

The intensity showcased across Terror and Submission was a wise decision for Holy Terror, because unlike so many of their peers, they produced an effort that could be remembered fondly. This is still pretty fucking wild by today's standards, and the cult status of this band is well deserved, while so many other, safer thrash metal upstart albums of the 80s languor in the black hole of memory. I can't say that the entire effort is packed to overflow with memorable riffs, but taken as a whole it's 42 minutes of pleasure and pain for any thrash magnate who seeks the less traveled path.

"Black Plague" is disgustingly fast and will hit you like an 18-wheeler on demon auto-pilot. Don't like it? Then don't hitchhike on Rt. 66, motherfucker. The speed blisters and swells like the friction sores that must have caused great injury to guitarists Kurt Kilfelt and Mike Alvord, as their riffs buzz through the recording like a pair of buzzsaw wielding killers in a competition to see who can decapitate the most college students. The leads are just spastic, awesome nonsense, and Deen's vocals range from a harsher style to some clear wailing, but always around the same range. "Evil's Rising" is deep and crushing, but picks up to the same level of speed, with some great vocal howling and drumwork courtesy of Jack Schwartz. "Blood of the Saints" dials back the speed for a crude and rude opening rhythm, but sure enough, it returns to road worthiness with a surprisingly anthemic chorus section. "Mortal Fear" explodes into more chaos at the expected tempo, but "Guardians of the Netherworld" has an old school metal tint, pumping pace where Deen really gets to shine, basically Holy Terror doing ancient power metal.

A war is raging on inside us, guarded by the horde
With lesser gods of higher rank, prodding them to war
No Father, Son, or Holy Spirit
Nor defences from the foe
All are battered, tortured, shattered
Allegiance without death is woe

The lyrics to much of the album read like a poor man's Paradise Lost, much more serious and well written than other bands of the era were capable of delivering. "Distant Calling" has some great power melodies that wind up before the verse, and it's another of their classic metal charge pieces and one of the very best songs on this album. "Terror and Submission" features a kickass, burning lead over the dense, grinding melodies, and "Tomorrow's End" is just sheer, crashing momentum, like a windstorm approaching across a desert at 10x the normal speed. The bridge has a hyper, ascending rhythm that swerves back into the lightning verse, and there's a crunchy thrash breakdown in there as well. "Alpha Omega - The Bringer of Balance" is perhaps my very favorite track from the album, with a wealth of amazing riffs that are bost caustic and beautiful, creating an epic atmosphere of desperation and warfare.

Terror and Submission has one of the best 'apocalyptic' tones of any thrash or speed metal album in history, right alongside Holy Moses' Finished With the Dogs or Znöwhite 's Act of God (the latter of which came out the year after this). It's completely aggressive without needing to sacrifice good songwriting or musicianship, and I truly wish more bands had gone this route instead of going all Metallica lite. This is a great record, that belongs in any true thrashers collection, and it would not be their last...