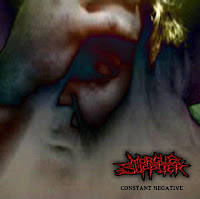 Normally I am not one to go out for much grindcore, as the scene is controlled by a bunch of tight wadded, spastic scenester kids making awful political statements or channeling their A.D.D. into the craziest patterns their hands and feet and vocal chords can spew. I am far more the type who likes his grind sauteed in well written death metal and a complete lack of pretentious posturing. Morgue Supplier, out of Chicago, offer a solution that everyone can be satisfied with, and Constant Negative is an excellent shell for the terrifying payload potential. Morgue Supplier is a HEAVY fucking band, the kind of heavy that is used to demolish concrete structures, foreign armies and the dreams of the innocent. They provide a bleak indoctrination into the hopelessness of living, the perversity and addiction which still corrode the margins of our civilization despite the wasted attempts of public service announcements and too often hypocritical good will.

That all of this is delivered in just over 21 minutes (less, if you discount the Metallica cover) is a testament to the band's talent at writing impulses of carefully constructed chaos. Morgue Supplier are a dynamic band, that is, they will not simply blast and grind through you; they actually write songs, which range from the staggering and unforgiving speed of other deathgrind acts to slower, doom laden passages which recall a fantasy jam session between Godflesh and Pestilence in 1989. Vocalist Paul Gillis sounds like a bulldog who was experimented upon, given sentience, then escaped from his captors and tormentors in a lab fire, and is now out to seek revenge...okay...not one mutant bulldog, but a pack of them. He snarls and growls in tandem, creating a percussive ruckuss that adds momentum to the rhythm sections which feel like getting slammed in the jaw repeatedly by a steel girder swinging from a crane.

"Constant Negative" itself is the grand christening to this timely little juggernaut, and it swells with almost Gorguts-level mathematical oddness that breaks into some of the slower passages (I mentioned before). "Slave" will just fucking kill you, a grinding thrasher hyped up on every drug imaginable. But thank to the excellent production here, you can taste every little meathook rhythm as it hooks a slab for the freezer. The riffs after :30 actually become intensely hypnotic before they transform into an all out battery which places your brain and audio inputs at the brink of collapse. "Forgive Nothing" is the sound of those aforementioned bulldogs tearing up the flesh of anyone in their path, grinding vomit holocaust with spasms of winding thrash death punch. "Mother of Dog" is one of the longer originals on the EP, and the slowdown after 1:00 is one of the most atmospheric, incredible segments of the material...like the drug addled stupor of one too many early AM rushes to the emergency ward.

Indeed! "Degenerate" is another turbulent piece with some tight, spastic hooks that resound like a pedophiliac's laughter as he's handed his pink slip from the local prison. After this, we are treated with Morgue Supplier's rendition of "Fight Fire With Fire", and while I would have gladly traded it for another original track, at least the band makes it their own (after the acoustics, of course). The vocals actually sound good over it, and the blasted bridge riff is pretty hot. The EP closes with two re-recordings of tracks from the band's 2004 Sociopath album. "Convulsive Reoccurence" features some of the most slamming breaks on the EP, busily grooving beneath the destructive arc of Gillis' throat, and has another of those incredible slow rhythms, vibrating beneath some architectural speed picking. "Open Sore Abuse" is laden with Eric Bauer's shifting drum work and some insane rise & fall rhythms, like the final cleaving of skull from neck as the bonesaw drives on down to the autopsy table.

Morgue Supplier is pretty fucked, in all the right ways, but you never once feel as if they lose control over what they are creating (like so many of those subpar spastic bands created to impress the brainy chic that always hangs around the local tattoo parlor). The lyrics are deceptively simple...delivering chaos through a stream of angered thoughts that accumulate from the far corners of the mind. This is no bad acid trip, it's more like a bad night of 'mix and match whatever chemicals you have in your cupboard'. It's like drinking antifreeze and being rushed off to the clinic...your whole life flashes before your eyes, or at least someone's life.

Complaints? Not really...I could have lived without the Metallica cover, but it's not bad. If you like death metal, you will probably like this. If you like grindcore, you will probably like this. Ghettocore? Sure. 'Math' metal? Why not. Constant Negative supplies so many corpses that they're stacked up in the back alley BEHIND the morgue. It will be great to hear the band's next full-length, especially if it can retain the quality of what this EP contains. Of course, I'm not sure the Prairie State can carry such a burden without exploding, but if Morgue Supplier wipes it off the map, all the better!