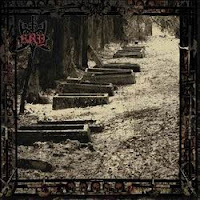 Thank you ever so much, L.O.N., for I am only recently recovering from your previous album (and career height) Od południa na północ when you have so courteously sprung this upon us all. Granted, Kry is not quite so impressive as its recent sibling, but only because you feel like you've just heard it. If there is a difference with this album, it is that the orchestrations are more firmly entrenched in the driving black metal tones that propel them. I would argue that this has a tighter production value than any of Hellveto's previous work, but few of the songs here sound like more than a simplified reduction of Od południa na północ.

Kry is actually a brief effort, with only six songs at about 31 minutes, and its brevity makes it easily consumable. What I'd recommend is to queue it on your playlist right after its spiritual predecessor, if only to extend the duration you can be immersed in the scintillating symphonics and glorious thunder hymns. "Kry" descends like a crystal tear from the heavens, a monument to sadness and loss, while "Glod" blasts at a furious pace, with L.O.N. contributing some guttural vocals alongside his usual pagan rasp. "Powiedz Mi..." is both martial and beautiful, with sultry guitar lines that saunter across the march of the percussion. "Kraina Mgiel" shines with its collision of acoustics and symphonics before entering another forward black charge, momentum encapsulated in great sadness. "Rzucone na Wiatr" is the real highlight here, with a few rhythms that actually branch out into separate territory, and some good basslines that crawl about its depths. "Smak Zniewolenia" is a suitable effort to close the album, with some ringing guitars and tiny angel voices that glare at you through the mix.

Much of Kry plays out like outtakes from Hellveto's last effort, but this is not necessarily always a bad thing. Still, it somewhat lessens the value of this release. But the final two tracks here are more than enough for a fan of L.O.N. to digest, and there is nothing here that could qualify as bad. Just not as inspiring in full as the last one, and perhaps a little overkill.