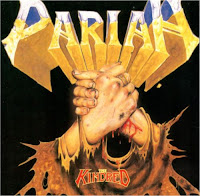 Pariah was a UK thrash metal band formed as a separate project of the members of Satan, including the 'other' Michael Jackson, who also fronted that band. To make things even more perplexing, Pariah was formerly called Blind Fury, and released a great album under that name in 1985. The band was also a stopover for Steve Ramsey (guitar) and Graeme English (bass) before they left to start Skyclad with Martin Walkyier (of Sabbat). Still following me here?

Their music was not a long haul away from Satan. Like many other UK bands of the period, they were playing thrash metal that still had a foundation in the raw heavy metal that had dominated the country for the past decade. Old habits die hard, but The Kindred is pretty much a thrash metal album at its core, with dirty and punctual muted rhythms and crazy leads. Of the two Pariah albums he fronted, Michael Jackson's vocals were superior here, sounding a bit like Suspended Sentence. Like most everything these gentlemen ever released, The Kindred is a solid if not wholly impressive debut. Think of a more modernized Onslaught.

"Gerrymander" opens with some bass, samples and melodic leads that erupt into one of the better aggressors on the album, though the stomping of "The Rope" is superior, with a raucous edge that reminds me of Bay Area stuff like Vio-Lence or Exodus. "Scapegoat" and "Foreign Bodies" remind me of Satan, and I especially like the intro to the latter, though the riffing meat of the track itself is average. "La Guerre" is an acoustic intro to "Inhumane", well paced thrash and speed with some good vocals and riffs that at least create a good momentum. The bridge riff to "Killing for Company" is pretty good, but "Icons of Hypocrisy" doesn't really deliver after a nice intro piece. That leaves the "Promise of Remembrance", which opens in a really cool, atmospheric acoustic segment and proceeds to tear through some of the better riffs on the entire album. The final track "Disciples Anonymous" is actually quite good, though it doesn't receive any billing on the CD, it has some frantic little technical thrash rhythms at the minute mark which are amazing.

The mix here is another of those timeless 80s jobs which simply doesn't lose face after several decades. Vocals are right in the middle here, but the riffs and rhythm section are more than adequate and the entire affair feels crisp and aggressive. The musicianship is really good, these guys had the chops to be one of the better tech thrash outfits in England, though they never overly flaunt them. The Kindred is a good debut, and I'd recommend hunting it down if you like other UK thrash like Onslaught or Xentrix. But it's not their best.