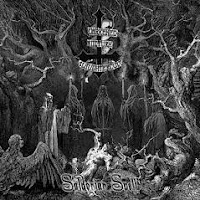 Darkened Nocturn Slaughtercult sit atop the very royalty of the German black metal scene. Like many of their peers (Dark Fortress, Endstille, Eternity, etc) they write in a very straightforward style which eschews much innovation in the face of its sinister atmosphere. Combine the blasting evil of a band like Dark Funeral with a colder, grim edge of Darkthrone or Mayhem and you arrive at the sound of the Saldorian Spell, the 4th full length of the Teutonic cult, picking up where the excellent Hora Nocturna left us in a black, bleak wood of oppression, mysticism and filth. I can't say there are any surprises to be had on this album...if you've heard the last few, you already know what to expect, and the band simply delivers on that promise alone. This spell is a blessing and (to a lesser degree) a curse. It's not the first thing I'll reach for when I want a nocturnal hyperblast, but it's a solid 41 minutes to add to the band's legacy.

Little time is wasted in getting to the title track...just under 90 seconds of cold woodland ritual ambiance and then the infernal confrontation of blasting drums and streams of diabolic chords that pay a bloody tribute to the sounds of classic Swedish black, beneath the torment of Onielar's rasp (one of the better German BM vocalists). "Beneath the Moon Scars Above" is an immediate, in your face blaster with more tearing, vile melodies and a thundering bass lick that cuts through the guitars. When the song slows to a charging pace it becomes a surefire anthem to destruction, and "Kataklysmic Bretherens" continues the onslaught after a slow intro of morbid chords. "The Descent to the Last Circle" is perhaps my favorite on the album, with an extremely simple, punkish black fuel to the riff which pays tribute to a Hellhammer/Mayhem influence before blasting the same note pattern into the underworld. The latter half of the album also includes a few gems, like the beautiful melodies of "Glance at the Horizon", the stark and bloodied "Suitor of Death" and the fierce rocking of closer "The Saturine Chapel".

Deafening its centenary droning beat, a
timeless tone, an elegy of melancholy, born
out of nightly died away choirs.

With good lyrics and good music...I can do nothing but recommend Darkened Nocturn Slaughtercult to anyone who values a straight shooting black metal band. The band does not delve too heavily into an atmosphere beyond that which its broiling chords create as they stir the cauldrons of the abyss. A few of the tracks have some subtle, melodic touches buried within which craft more than a mindless tribute to other works, but there aren't many riffs that outright blow your mind. I hate to call any black metal album a 'pleasant' listen, but if, like myself, you have become attuned to this sound through exposure to hundreds or thousands of such albums, Saldorian Spell is a satisfying and 'pleasant' album with a tight production standard, well suited for moonlit nights of macabre revelry.

Highlights: The Descent to the Last Circle, Glance at the Horizon, The Saturnine Chapel