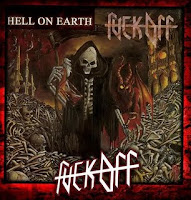 The funny thing about revenge is that it is not a dish best served cold, but a disc served through hot riffing, cohesive songwriting and an enhanced lust for life. Hell On Earth is engaged in such a fight for existence, an album that manages to exceed the grasp of its piss-poor predecessor within only a matter of minutes. No, this is not where I start heaping praises upon this sophomore platter from the Spaniards, but I have to begrudgingly admit that...well...it's not all bad. There was a new vocalist here, Pep Casas, and he's got a nice edge to his throat that reminds me of some rugged Germanic mid-ranged speed metal, albeit with the slight touches of his native accent. The guitars retain their crisp balance from the debut, but here they are already off and running through the gates with superior riffing as early as the intro chug.

Yes, loyal listeners, Fuck Off has heard your complaints, and their answer was all in the name. After popping out the cassette from the tape deck in your stacked motor vehicle, you could rest assured that what you just heard was a thrash album. You may immediately be reaching for another album which is 10x or 100x better than Hell On Earth, but the 45 minutes you just spent were not entirely in vain, and you probably got your head banging to the seductive lyrics and flagrant fouling of the Slayer/Metallica influence in the riffs.

Truly, Fuck Off's "Witch (Hell Below the Belly)" is one of the more thoughtful odes to the feminine form to feature in the dawn of the Naughty Nineties, and some measure of tumescence was achieved at this daemonic orgy. But the ride does not end here, as "Blasphemy" carves out another pound of flesh from its simple but extremely Slayer-ific bulldozing. Pep's accent here is pretty kickass, from the sinister rap of his verse to the deeper, death metal grunts he doth evoke. "Midnight Confession" is rather a clutter, which can't even come close to comparing with the previous two songs, and is better skipped, but "Whom You Never to Say His Name" arrives in a flurry of riffing not unlike Sentinel Beast or a more anthemic Tankard track.

"Don't You Have Fear" is a dull slammer, and the latter half of the album does seem to drift apart in terms of quality, with only the forward charge of "Inquisición" to really provoke a head banging response from me. The rest are mediocre at best, some falling to the level of Another Sacrifice, and in particular the instrumental indulgence of "Cyclone" is a rambling exercise in bass guitar and the occasional thrash riff that would have served better in another song. But, at the very least, HALF of this album saw Fuck Off at the prime of their career, writing some sexualized, dark occult speed/thrash metal which is actually worth a damn. No glaring recommendation from this author, but Hell On Earth destroys the debut album and if you're itching to hear what Spain was producing for this style before the grunge and death struck and disintegrated the thrash reign, you could do worse. The logo was so nice appeared on the cover twice, and now I fuck off and bid you adieu.

Highlights: Witch (Hell Below the Belly), Blasphemy, Whom You Never To Say His Name

Verdict: Indifference [6/10] (human holocaust screaming out to die)
Posted by autothrall at 6:04 PM