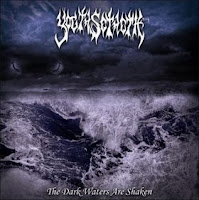 Yogth Sothoth is a Colombian band that was once known as Planta Cadaver. They have released one album under each name, and though The Dark Waters are Shaken is branded as an EP, it's got a full-length worth of material, since the band has included their Hymns to the Ancient Ones demo (2005) and single-track Calling the Wrath of Evil demo (2000). The band plays brutal death metal with a slight influence of Sepultura's crunchier thrash days (Beneath the Remains, Arise).

The new material on the EP is crisp and barbaric. It's also decent fun, as "Hades Wrapped in Clouds" and "Triumph of the Ancient Ones" contain an old school sentimentality that merges well with the brutal Suffocation-like batteries. There aren't a lot of big hooks to remember, but the material is strong enough to keep your attention and bang your head a little. Starting with track #5, you get the Hymns to the Ancient Ones demo, which has denser, crunchy demo production and vocals that are far more guttural. This material was average at best, but a nice inclusion that might please die hards for raw, disgusting death metal. "Calling the Wrath of Evil" has the band at its earliest for this incarnation, but the track has a dirty bite to it that goes well with the vocals, and I actually enjoyed this more than the 2005 tracks. If it wasn't apparent from the band's name and song titles, they are very much obsessed with the Lovecraftian Mythos.

If you enjoyed their debut Abominations of the Nebulah Mortiis from last year, then the new tracks here should please you. It's a decent fan package, and I like when bands spice up short EP releases by adding demos so you can have all the material on disc. The band's writing isn't at the level that it stands out to me among the many thousands of other death metal bands in the world, but I've heard far worse.