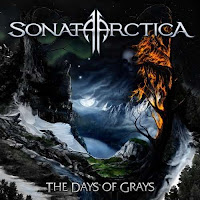 The last Sonata Arctica album I enjoyed was their 1999 debut Ecliptica, which I took for a more intense, extreme alternative to fellow Finns Stratovarius. Formulaic, melodic power metal with some good hooks and savage musical skill. Since that time there have been a few decent tracks spotting their catalog, and a decade (and a great deal of success) later we have their 6th opus The Days of Grays. Though it features some fine symphonic elements and a few exciting tracks, the remainder of the album is unfortunately a dull excursion into territory far too 'safe' and uninspired.

The instrumental "Everything Fades to Gray" is a nice start to the album, with an ascending symphonic melody. "Deathaura" opens with further classical instrumentation and a female vocal narration (not totally annoying, mind you). At this point, you realize The Days of Grays will be smothered in that same fairy tale atmosphere as previous records. The rest of the track is pretty epic, and few bands can incorporate the symphonic angle and sound this good in the mix (Sonata Arctica spares nothing from the warchest to make their productions huge). Tony Kakko's vocals are clear and melodic with a little twinge of accent which actually adds to their value, but rarely are the lines catchy enough to stand out. It's no surprise that the better songs on this album are the 'heavy' ones, like the charging "Flag in the Ground" or the dopily titled, proggish "No Dream Can Heal a Broken Heart". These are counterbalanced by the 'power ballads' of the album ("Breathing" or "As if the World Wasn't Ending") which have all the depth of an overhyped, shallow track from Pink or Christina Agiluera. Remember when this type of song was actually catchy? Very rarely does it succeed in a metal band.

Lyrically, there is some interesting sentimentality to a few of the tracks, like "The Last Amazing Grays" which deals with aging in a pleasant way, lacking condescension. Then you've got tripe like this, from the wrist-cutting "The Dead Skin":

Tears don't mean anything
If we don't know when we're sorry
No one will win today we can't play this game... this way
We cannot soar and still stay on the ground
Don't wanna see me, hear me, hate me...

This album was really a mixed bag for me. There are a few moments where it truly soars, and then others when it seems complacent with its mediocrity. Sonata Arctica tries to tell stories with some of these songs and perhaps there is a narrative disconnect. They are an ambitious (and proficient) band, but I wish this ambition would find some escape velocity and abandon the 'safe' zone so many of their albums play around in. It's the same issue I have with most of the Stratovarius catalogue, though this band travels slightly further out of the box.