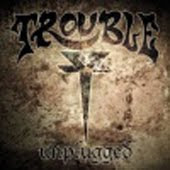 I always struggle with unplugged albums, as I feel they largely lack the power and intent of the original recordings. That said, there are a few occasions in which the acoustic version of a metal or rock song can actually supercede it in value, and I have no problem with original 'unplugged' tracks.

Trouble's latest is, for the most part, a dull excursion with a few wimpy retreads of good songs (like "Rain" and "Flowers") and some unreleased material. Though the basic melodies are present, the songs don't work in this format. The last four tracks on the album are the strongest, previously unreleased material including a cover of the Yardbirds' "Heartful of Soul". The grimier and older mix of these is a boon over the shining but lifeless vibe of the first six acoustics.

Of course, this isn't really a 'new album' and should not be held to the same criteria, but I can't recommend it to anyone but the rare Trouble diehard who wants to be bored out of his skill. And even to him would I say to wait for the next full-length and pray it will return to the killer hooks of the band's library of classics (though without the same singer...) Best to skip Unplugged. It's a stopover, and not a good one.