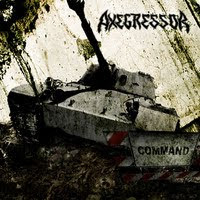 I have some vague recollections of this band's EP Axecution from a few years, but the Finns arrive here at their first full-length. Axegressor is a band performing heavier thrash metal which often borders on death, and Command has a military aesthetic which falls somewhere between Hail of Bullets and cult thrashers At War and Sodom.

The mix of this album is vibrant and fleshy, catapulting even the band's more mundane riffs to headbanging fury. I personally found the faster material on the album to be its strong point, such as "Damage-Inked" (haw haw), the brutal "Barricade Command", and the flawless "Iron Will Executor" which recalls all of the very best elements of Sodom or Dead Head. The band's namesake track "Axegressor" is also fun, and for the slower material there were a few points of "Servants" that rocked.

From the world they close the doors
the whores of evil clad as sheep of god
practice their foul vocation
troops of doom – spill the blood!

This is not a technical band, the riffs are blunt and straightforward, conveying to you the perils of war and archaic metal silliness simultaneously. Fans of traditional European thrash metal will no doubt enjoy the band's no frills writing. The album sound's great, but there are few songs here which are laden with truly memorable riffs, so plenty of room for the band to improve.