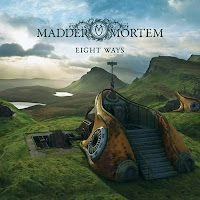 Madder Mortem have always been one of the better female-fronted bands out of Europe, in large part due to Agnete's creepy, sultry vocals that lend an almost dark jazziness to the gothic/groove metal mire they reside over. Their previous album Desiderata was a monster of an effort, with many instantly memorable tracks and no generic 'fairy metal' to be found. Eight Ways takes largely after that album, with more inherent progression.

"Formaldehyde" starts with a light, jazzy touch, the melody of the guitars foreshadowing some of the later vocal lines. Agnete's vocals escort the track to its climax and the band lets loose with another of their deep grooving rhythms. "The Little Things" is like a hybrid of Diamanda Galás and Korn. I know that sounds frightening, but it's better than you'd think. "Armour" is a powerful melodic number and one of the strongest on the album. "The Riddle Wants to Be" has a strong, seductive allure before it bursts open at the midpoint with proggy guitars. "Where Dream & Day Collide" bastardizes jazz, blues, and gothic metal into another of the album's highlights.

All this being said, while Eight Ways is more experimental and dynamic than its predecessor, the songs are not quite so catchy. There is no "My Name is Silence" or "Hypnos" on this record, two tracks I still listen to all the time. But at least it's an interesting album, and the band continues to sound like no other. It's the type of which takes a few listens to settle in, with little instant gratifaction but more long-term reward. Madder Mortem remains far superior to all the elfen shite fairy tale metal that plagues Europe, and really this band is in a world of its own.