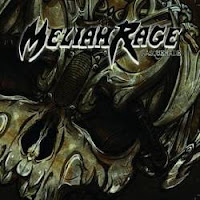 Having grown up here in Massachusetts, a budding thrasher in the 80s, Meliah Rage and Wargasm are recognizable as the two local bands which managed to eek out major label deals in the 80s, the Golden Age of the genre. Both put out a decent debut album but dwindled into obscurity. Meliah Rage reformed years ago, and started to release new material, but it's not until now that they've managed to come close to matching their debut Kill to Survive.

Masquerade is the work of a mature thrash band content with the simpler days of yore, when a metal song was about writing some good riffs and lyrics and having subject material that isn't just "Thrash Metal _ _ _ _" or "We Came to Thrash" retro worship. If you're seeking technical thrash/speed, you're also not in the right place. These guys carve a big riff and rock it, beneath Mike Munro's very Hetfield-esque vocals. In fact, Metallica is a great reference for this band, because if you found yourself enjoying some of the slower, old school thrashing riffs on Death Magnetic, then you will likely enjoy this entire album. I also hear some early (i.e. 'good') Metal Church in the band's writing.

"Lost or Found" is an interesting track to open this record, with a melodic progressive leaning before the anthemic, charging verse rhythm. The song breaks into a slower acoustic segment and trotting arabesque riff which are quite nice. "Chosen" kicks off with some acoustics that recall old Metallica below some 'spoken word', then lifts into a nice melodic hook. "History Will Tell" and "Last Rites" are among the better pure thrash tracks on the album, and the band continues to add a slightly progressive touch to the album on "Hour Glass" and the title track.

Masquerade shapes up quite nicely, with a huge production to it that is the band's best to date. This is not a pure thrash/speed metal effort like their classic Kill to Survive, and that would remain my favorite (and one of the better New England metal albums of the 80s), but this is an effort sure to please their old time fans.