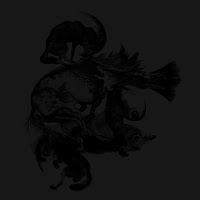 Previously known for his drone music, Jenks Miller has lifted Chapel Hill's Horseback from that niche to one all his own. Immediately the album submerses you in its unique atmosphere with "Invokation." Driving and warlike repetitive percussion, a hearty center of sludgy bass and rhythm guitar, and over top a decidedly twangy, western (think Ennio Morricone, not Willie Nelson) feel of the lead guitar. Easy to imagine, given Alejandro Jodorowsky is amongst the artists' influences.
"Tyrant Symmetry" opens with a mid-tempo bass rhythm reminiscent of the work of Al Cisneros, Jenks' Cobalt-esque vocals weaving amongst the notes: each is clear in the production, and the solo amongst the instrumentation at 4:09 is simply gripping. "The Invisible Mountain" kicks the tempo up a notch from the previous two tracks, spacey and yet tense psychedelic riffs opened up my mind to grim, dark prairies where natives scratch a living out of the unforgiving flatlands.
The fourth and final track "Hatecloud Dissolving" has a cinematic, angelic feel that reverberates through your essence. A calming, gorgeous soundscape that has almost left me without description in its beauty. The vile blackened vox appear and sink into the cool creek of the music, distant. During the final third of the 16+ minute track we are lifted from that prairie, into the sky: ethereal synths envelop and spin their magic, ending the journey with a simple melody, the hate dissolved.
It's refreshing to hear post-metal/drone/experimental/stoner etc. tunes so groundbreaking and moving out in a sect of music that is so easy to forge hackneyed down-tuned atmospheres with little skill. Not so with Horseback, as the care and skill that went into crafting this music is obvious. I enjoyed this album tremendously on an emotional level, as it has a fantastic intangible quality, an atmosphere I can't quite put my finger on. If others will interpret and enjoy it as much as I did I can't say, but it's unquestionably one of the best things I've heard this year. I anxiously await further material from this one-man experimental wrecking crew.
Verdict: Epic Win [9/10]
http://www.myspace.com/horsebacknoise
Posted by JD at 5:08 PM