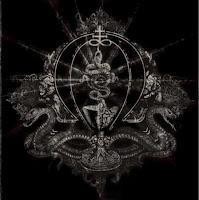 While I may not hold them in the same regards as a Root or Master's Hammer, Inferno is nonetheless one of the finest traditional Czech black metal bands. If you're looking for a fix of Satanic darkness, you can usually count on this band to deliver, especially their full-length releases, of which Black Devotion is the 5th.

The album begins with a haunting "Prolog", harsh percussive synths dusting up an ethereal, ambient backdrop. "Superior Will" crashes forth with catchy Norse riffing, a sick verse with Adramelech's excellent, hostile vocals and some truly biting guitar lines. Next, "Whisper of Hope in Bloody Tears" explodes, blasting occult madness with a great guitar bridge. "Holy Poison" is another fast paced crusher, as is the careening "Eaten by Rats Forever". "Loyality of Honour" is anchored by another of the slower, creepy riffs like "Superior Will", and "Sign of Hell" is a thrust of carnal, abysmal fury. The rest of the album is very listenable, constantly dark. This is basically what 1349's latest album could have sounded like had they decided not to suck.

Black Devotion sounds ominous and primed for wrist-cutting or hanging yourself from the nearest noose. It's musical enough to maintain your interest, though it does not depart from any tried or true black metal formula (the band never has). If you're looking for some solid, no-frills black metal in the vein of Swedish and Norse bands like Emperor, 1349, Dark Funeral, etc, then Inferno will certainly appeal to you.