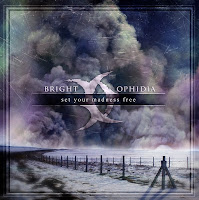 Previous Bright Ophidian albums Coma and Red Riot were an interesting departure from the typical death metal we've come to expect from Poland, but despite their ambition, they left something to be desired. I get this same vibe from Set Your Madness Free; while I can praise for sticking out like a sore thumb, it's a very sore thumb indeed.

When listening through this band's material, you must shuck all convention out the closest window and take them as they are. While there are the roots of death or technical/math metal within their writing, the band will simply veer in any direction they desire. The results, unfortunately, do not form any cohesive sense of abstraction. Take "Magma", which sounds like a more technically improvisational Korn. Groove metal parts alternate with silly whispering, and when the band builds up to the heavier moments, they sound very tough and 'bouncy' like any random band you'd find on Ozzfest in the late 90s. But remember...no two tracks here will quite the same. "Chanting of the Maniac" builds some playful riffs under some dorky sounding gothic whispered vocals. "I Can" has some decent riffing moments, like fusion prog heavily laden with metalcore grooves, but the vocals again do nothing and the track wanders into whatever ball field it desires to play on at the moment. "Die and Become" begins with a few seconds of ambience and strange, noodly guitar but then transforms into an ugly groove metal track.

I feel that if you could take a few of the album's stronger moments and extend them into experimental fusion tracks, Bright Ophidia would be a fascinating band. Sadly, there are so many unsettling nu-groove metal elements like repetitious 'tough' sounding Pantera vocals and dull slamming riffs that the cool moments are outnumbered. Weird does not always equal good, and I'd advise checking out the band's earlier albums before turning to this one, or Dominium, a pretty good Polish death metal band featuring some of the same members.