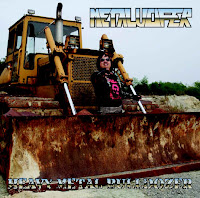 There are a couple things you are going to have to accept about Japan's cult metal act Metalucifer to truly appreciate what they offer. One, Gezo (Sabbat) and crew are going to write songs about heavy metal music that sound as if they were written during or prior to 1985.

Two, Gezo and crew are going to write songs about heavy metal music that sound as if they were written during or prior to the year of 1985. For Metalucifer is a celebration of those early, formative years, when leather and heavy metal made for an exciting subculture that had many years before it would become jaded and reviled by new generations of tweens and twits. You'll either get it or you won't. If you do, you will probably enjoy this record even more than its predecessors Heavy Metal Drill and Heavy Metal Chainsaw. If you don't, there's the door.

The band have retained their tongue in cheek approach to songwriting. Every title is "Heavy Metal Ironfists", "Heavy Metal Battleaxe", or "Heavy Metal Wings of Steel". If a new band tried this today, I'd want to strangle them. But this is not a new joke, the band has been at it for 14 years, complete with Gezo's dirty, smutty vocals and phenomenally bad (i.e. awesome) Engrish lyrics that the band have wisely held on to.

The way that people walk is as hungry hyenas
Their greedy eyes are more rotten than zombies
This town is full of trendy and terrible waves
We wanna clean up this town, Bring the chosen one
He's final terminator, a noble servant from hell
Moving on with the shake as an earthquake
He appears with his giant destructive machine

For Metalucifer exists in a fantastic world much like Tim Schaeffer's upcoming Brütal Legend game, where the skies are full of gleaming chrome angels of death and the mountains are Marshall amplifiers. The lyrics create a sort of quasi-mythological universe of terrible metal stereotypes, yet maintain a positive, inspirational feel. Is this an ironic album? Yes and no. Gezo and his band really love these old metal records, and collect them. The riffs here are all classic, and a few of them damn good (as on "Heavy Metalucifer" and the Maiden-esque "Heavy Metal Demons".) Influences? You name them. Basically if it was metal music from the 70s to early 80s and didn't suck, this band has successfully summoned it forth on this record. The album sounds great, plug in and play, with all sincerity.

Again, you'll 'get this' or you won't. I'm not always a fan of joke bands, save the few that can transcend lame parody and come into their own, all the while writing good music. Metalucifer is one of the few that succeed at this, and makes for a nice respite from the more serious (but even more excellent) Sabbat.