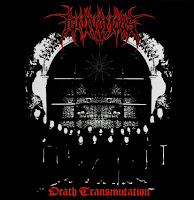 Much as their name implies, Ignivomous is like a burst of lava spewed forth from the unholy throat of the Abyss. Disturbing, caustic bursts of thick grinding death metal, wailing, uncontrolled leads, and kit molestation courtesy of a former Destroyer 666 member (the band are all Aussie scene veterans). The tone this band uses for their guitars is thicker and crueler than even Sweden's 'trademark' style. The results are in and Death Transmutation is one of the heaviest fucking albums this genre has visited all year.

There is no room to breathe. All 7 tracks are brutal, juggernauts of radiated flesh suffocating all within the album's blast radius. "Hedonistic Pain Ritual" draws first blood with an onslaught of crushing, grinding chaos. Though dense and fast, Ignivomous perform their death metal with a lot of old school character. Creepy old school riffs and breakdowns that count. Whether it's the title track, "Noneuclidian Maelstrom" or "Beckoned to a Global Tomb", the album provides a consistent beating which few this year can match in heaviness. The vocals are so in tune with the music that they also get lost among the guitars. The lyrics are suitably desolate and destructive.

Pinioned by abjection
Through viciousness and squalor
From nowhere to nothing...

And those are the real stars of this disc, the disgusting, thick guitars which sound like they are giving you a first person tour of what happens down at the meat factory. Once "The Alchemy of Suffering" comes to a close, you feel as if you've just been leveled emotionally. Death Transmutation is not about melody, and not often about catchy rhythms. It is about hacking you repeatedly with a meat cleaver until you are nought but ribbons of flesh on the butcher block.

Verdict: Win [8/10] (gulf between being and annihilation)