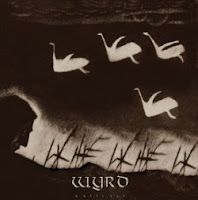 Kalivägi is the 8th full length from Finnish primal pagan/black artist Wyrd, an album which kicks much of the gothic/melodic influence that surfaced on their past few releases to return to the roots of albums such as Heathen or Huldrafolk. Six tracks and 40 minutes in length, it's a satisfying enough effort, though never mindblowing.

"Verisurma" opens and closes with the same synth line in different octaves, a chilling string that would not be out of place in some folk or barbaric fantasy. Connecting these points are sections of simple, mid-paced black metal that often follow the same melody. The mix here distinguishes the album from the band's early work, but the level of composition is much the same. Title track "Kalivägi" begins with a plodding bass and slow rhythm below Narqath's grim vocal eclipse, with a majestic, warlike bridge/chorus. The acoustic stream of "Hämärän Soutajat" is one of the highlights of the album, tranquil and relaxing with some excellent vocals, and when the song kicks into metal gear it is not unwelcome. "Loitsulaulu" is introduced with soaring melodies that create a fine whole with the black vocals, and another of the strongest tracks here. "Talviyö" is the requisite 'epic' at over 10 minutes, and quite nice considering it moves at the same pace through nearly its entirety of evocative, heavy acoustics and hints of melodic piano. "Kaikki Metsän Kaiut" caps off the record with some interesting percussion and another warlike anthem, and I enjoyed the woodwind 'breakdown'.

Kalivägi is arguably the band's best sounding album to date, that is if you prefer a modern, clear mix to the obscurity of the early releases. All the tones shine and the vocals ride them like the curse of Lowyatar upon the conscience of some hero of old. Once you get past the first two tracks (decent but occasionally dull), the remainder of the album is a delight. My preference for the two Vargtimmen albums remains, but Wyrd have made a decent visit to their past with this.