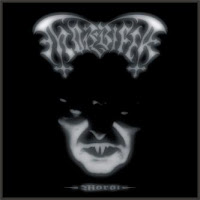 When you think of 'vampiric black metal' you usually think of bands like Opera IX or Cradle of Filth. Both have put out some good music, but they only capture the lore and horror of Bram Stoker and old black & white films in a superficial sense. Poland's Morbifer is one of the only bands I have heard who do vampire black in a grim sense which would appeal to fans of the cult black metal aesthetic. This is only the band's first release, but it really captures a dark and penetrating atmosphere with its mix of primal riffing (ala Hellhammer and oldschool Bathory) and a 'haunted castle' atmosphere.

"Smierc szkarlatna" uses bells and synthesized horns to simulate just such a castle, before bludgeoning you with its raw black riffs and deep, caustic growls. "Krol w czerni" delivers a deep, old Celtic Frost groove flavored with some light synths. Title track "Moroi" uses samples, bleeding melodic lines and a touch of acoustics to create utter despair. "Morbiferonomicon" is an acoustic piece with samples of wind and some percussion. "Nie bedziesz..." is the longest and best track on the album with some cutting melodies and transitions, never getting dull in over 10 minutes. The grim and blasting "Heksakosjoiheksekonahek" marks the finale, hitting you with some big, memorable hooks at around 3 minutes.

What Morbifer do right is create some simple atmospheres amidst tight riffing, with an aesthetic loyal to the forebears of black metal. The album sounds superb, exerting its lack of pulse where necessary but letting the blood flow freely for some glorious apertures of sound. There are a few moments where the riffing can grow dull, but it's not a long album (less than 40 minutes) and I hope a sign of things to come.