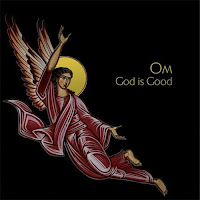 God Is Good is the fourth full length from Om, the first with new drummer Emil Amos after the departure of Chris Hakius -- Al Cisneros' (vocals/bass) counterpart from landmark stoner doom outfit Sleep. Amos fits right in, unquestionably bringing percussional flair to keep things interesting in a two-man skeleton crew of a band. However, as promised by Cisneros, there are new sounds to be found on God Is Good. Curious smatterings of woodwinds, sitar, clapping, piano and flute among others.
It seems with the departure of Hakius Om has almost shed their heaviness, for only about 9 minutes of minute duration I would consider metal. Even then, it's tenuous. "Thebes," the 19 minute opener, contains that portion of pseudo-metal, Cisneros chanting over his distorted Rickenbacker, some riffs familiar from previous albums. "Meditation Is the Practice of Death" is more about what modern Om apparently is. Experimental rock, with some ambiguous desert sound, world music with an interesting twist. Steve Albini returns to produce, and God Is Good has an incredibly rich sound, and it's a pleasant fit with the music. Cisneros' bass is creamy smooth, nicely coalescent with the miscellaneous percussion and instrumentation.
"Cremation Ghat II" is the final of the four songs, and my favorite, an instrumental piece that takes me to the harsh Fremen cave-dwellings of Arakkis when I close my eyes. It features the sitar heavily, along with some wonderful interplay between Cisneros and Amos. Since Om has moved from Southern Lord to an indie label (Drag City) perhaps this more light, worldly sound is their future. It's at once disappointing and exciting to me, as I love the heavier work of Om, but at the same time I can get behind this new sound and direction. Or, maybe the next full-length will return to the rhythmic sludgy onslaught of Pilgrimage. I'll be waiting eagerly.
Verdict: Win [8/10]
http://www.omvibratory.com/
Posted by JD at 11:40 PM

Not to be a nay-sayer, but according the liner notes/record jacket, Pilgrimage was produced and engineered by Steve Albini.

Ah, I didn't know that. My mistake!