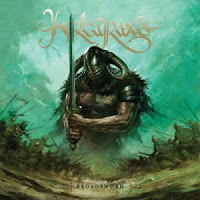 Helcaraxë is a band from New Jersey, with a style and theme you don't often hear paired together: melodic death metal and Norse history. Alright, there is one obvious comparison, and that would be Amon Amarth, perhaps a little early Unleashed, but Helcaraxë are not a bite off either band. Broadsword is the 2nd full-length, and while New Jersey may not be Northern Europe circa millenia past, it is the most universally reviled state in the USA. But it has produced some decent metal bands, and this is one of them.

Broadsword features 11 tracks of warlike melodic death metal with charge fueled verses, big dual melodies, and a cavernous tone to the album which really stands out. Unlike most run of the mill, big budget 'melodeath' bands from the States, these gentlemen (most of whom are also from Open Grave) are not fashionistas. You won't find them down at Hot Topic admiring each others latest tattoos, and when they write a breakdown in one of their songs, it actually fits. It's not just there for the fuck of it to please juvenile concertgoers, it actually builds anticipation and climax as such a riff should! When I claim the band is 'melodic, it is with the best intentions of traditional metal music, which this band has successfully mired within the brutality of death metal. Personally I enjoy when the band goes out, tracks like "The Iron Shield", "To Plunder", and the insane "Ginnungagap" created an atavistic reflex in myself to find the nearest Christian and smite them with the pommel of my sword while quoting from the poetic Eddas. But the band is also capable of writing an epic track like "Eye of Fire" (not epic in length, but in form and feel). The slower bombast of "Northmen" and "Chain Mail" is also quite good.

The mix of Broadsword is thunderous and mildly raw, after all this was recorded at a studio called 'Christ Puncher'... Lyrically the band is pretty simple; even the song titles, and in this way they did remind me of Amon Amarth. But when the big, reverberous vocals and the riffs combine here, it creates American Viking bliss. Fans of the aforementioned Swedish bands will find a good local band to follow here, and I might actually recommend this to a broader base of 'war metal' fans (Hail of Bullets, Bolt Thrower, etc), as there are a few similarities in tone. The band is selling copies of the album directly through their website (linked below), rather cheaply I might add.