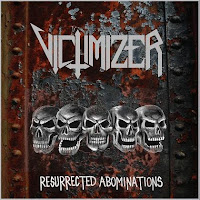 Resurrected Abominations is the latest release from Denmark's filthy thrashaholics. This is another release on Hells Headbangers, thus it's a given it will be tempered with a love for the old school. Victimizer creates aggressive and punishing speed/thrash metal with a vocal style that borders on utter death.

Fast flurries of speed dominate "Worthy of Hell", and some biting leads and battering grooves. "Reap the Nuclear Whirlwind" is another burst of 80s fury reminiscent of Possessed. The title track was my favorite on the EP, with some nice chugging breakdowns and a catchy verse rhythm guitar. "Lucifer's Domain" is a cover of the obscure Australian thrashers Hobbs Angel of Death done right, and the "E-37101" is another forceful, meaty, violent discharge of aggression.

The EP sounds pretty professional compared to many of the band's retro thrash peers. Guitars are bold and loud, cut through by whirlwinds of nonsense leads just like the band's influences. The band reminds me of Witchery in that aspect, though the vocals are louder and better and this is more exciting than that band's last two albums. There is a built in audience for this style of metal, and they will not be displeased with this material or the band's previous full-length The Final Assault.